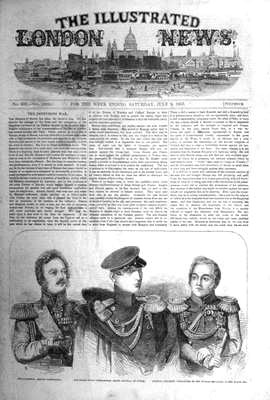 This copy has 8 pages, 16 sides, it was taken from a Bound Volume and therefore has the Binding Holes showing. This Copy has Foxing in places on it which will be reflected in the Price.

Front page shows an Article called - "The Impending War." Together with an Engraving of - Field-Marshall, Prince Paskewitsch. - The Grand Duke Constantine, Grand Admiral of Russia. - and Admiral Lazareff, Commander of the Russian Squadron in the Black Sea.

Double Page Engraving showing. 1- The Turkish Fleet at Anchor at Buyukdera, in the Bosphorus. Sketched from the Giant's Hill. 2- The Combined English and French Fleets in Besika Bay.

Opening of the New-Stand House on the Curragh.