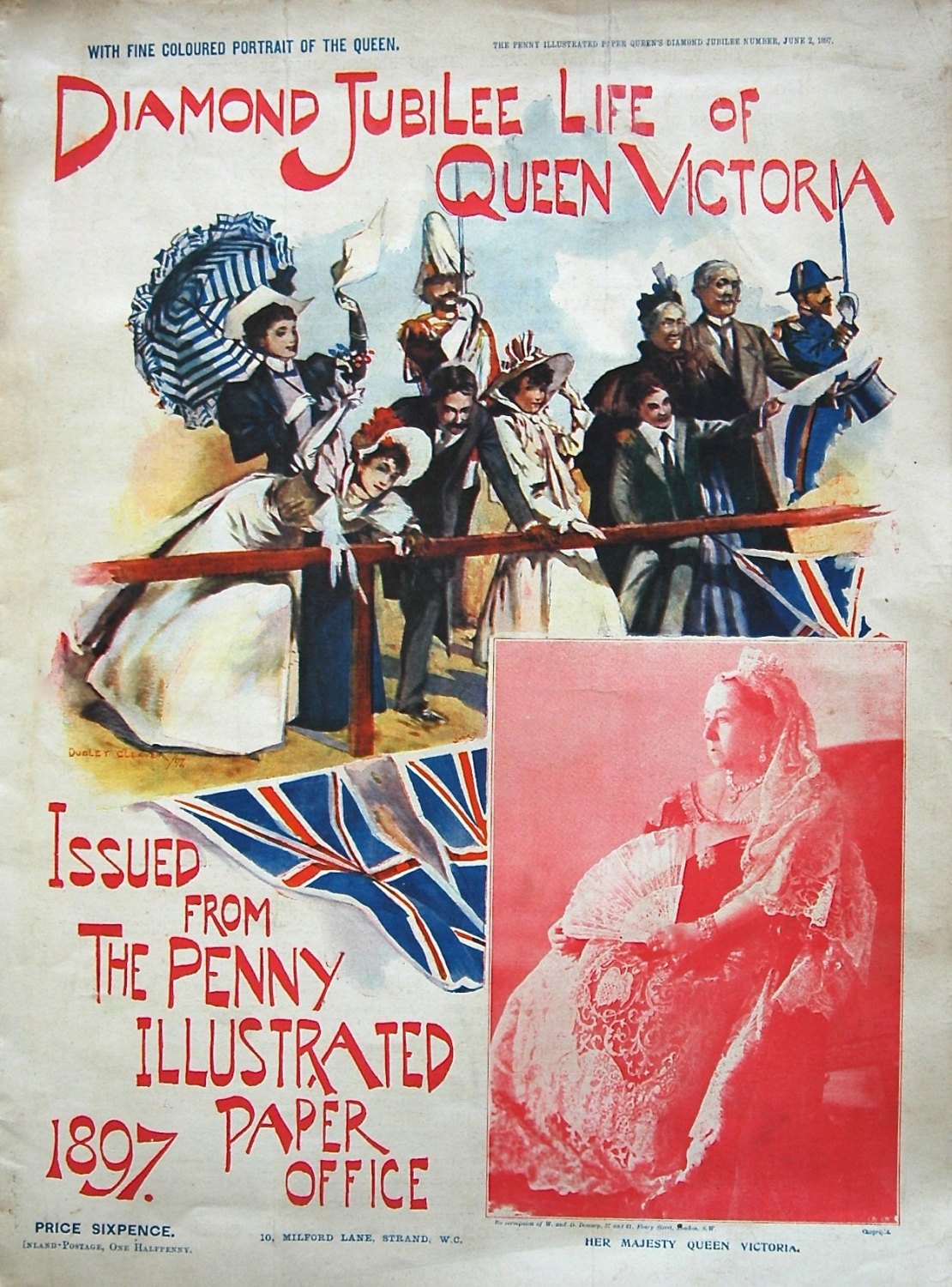 For Sale is the "Diamond Jubilee Life of Queen Victoria,"  Issued from the Penny Illustrated Paper Office.
Date June 2nd 1897.
Pages- 32.
Condition is Good, with No Foxing and Print being Bright and Clear. Staples Rusting.

Articles.
The Following is written by John Latey.
1- The Life of Her Majesty.
2- The Marriage of the Queen and Prince Albert.
3- In the Loving Sympathy of Her Children.
4- The Prince of Wales.
5- Her Majesty's Diamond Jubilee Procession.

The Following are Full Page Engravings with Descriptive Text.
5- Queen Victoria Proclaimed at St. James's Palace on June 21, 1837.
6- The Queen opening her First Parliament, November 30, 1837.
7- Coronation of Queen Victoria in Westminster Abbey, on June 28, 1838.
8- Marriage of the Queen and Prince Albert at the Chapel Royal, St. James's Palace, on February 10th 1840.
9- First Visit of the Queen to Edinburgh with Prince Albert, September 3rd, 1842.
10- The Queen Decorating Officers and Soldiers Maimed in the Crimea, on Horse-Guards Parade, May 21, 1856.
11- The Queen's First Investiture of the Star on India in the Throne Room of Windsor Castle, November 1st, 1861.
12- Her Majesty's Visit to the East London Palace, May 14, 1887 : The Queen's Welcome in Whitechapel.
13- The Quen's Jubilee Procession on June 21st, 1887 : Passing the Nelson Column in Trafalgar Square.
14- The Queen's Jubilee Procession in London on June 21, 1887 : The Royal Escort of Princes.
15- Crowning Episode at the Thanksgiving in Westminster Abbey, June 21, 1887 : The Queen Saluting the Prince of Wales.
16- The Prince of Wales Presiding over the Imperial Masonic Meeting in the Albert Hall, June 13, 1887.
17- The Queen's Jubilee Review at Aldershot, July 9, 1887.
18- Her Majesty Lunching at Windsor with Prince and Princess Henry of Battenberg and their Children.
19- Her Majesty's Italian Holiday in 1893 : The Queen Making a Water-Colour Sketch of the Lake of Maiano, in Tuscany.
20- Windsor Castle, the Favourite Residence of the Queen near London.
21- The Queen's Visit to Sympathy the Wounded Soldiers in Netley Hospital, May 9, 1863.
22- The Queen Investing a Knight Grand Cross of the Order of St. Michael and St. George in the White-Room of Windsor Castle, November 29, 1892.
23- The Queen's Reception of Li-Hung-Chang at Osborne, August 5, 1896 : His Excellency Reading the Emperor of China's Letter to Her Majesty.
24- The Queen's Visit to the Shrine in the Church of the Annunziata, Florence, April 11, 1893.
25- Her Majesty's Home Life : Princess Beatrice Reading to the Queen in a Cosy Nook at Windsor Castle.

The Following are Half Page Engravings.
26- The Queen's First Council, held at Kensington Palace, 11a.m., June 20th 1837.
27- Terrace Front of Osborne House, the Queen's Isle of Wight Residence.
28- Her Majesty and Prince Albert Fording the River Garry in Scotland.
29- The Queen Presenting the Royal Children on Board Her Majesty's Yacht at Kingstown, August 10, 1849.
30- The Queen's Visit to the Emperor and Empress of the French during the Crimean War : Her Majesty Received by the Empress Eugenie at St. Cloud.
31- Her Majesty and the Late Prince Consort Landing at Kingstown on their last Visit to Dublin in 1861.
32- The Queen's Jubilee Review in the Solent, July 23, 1887 : The Fleet Saluting Her Majesty on Board the "Victoria and Albert."
33- The Queen's Jubilee Review in the Solent : British Bluejackets Manning the Yards.
Middle Double Page Engraving.
34- Her Majesty Queen Victoria at the Thanksgiving Service to Commemorate the Jubilee of Her Reign in Westminster Abbey, June 21, 1887.