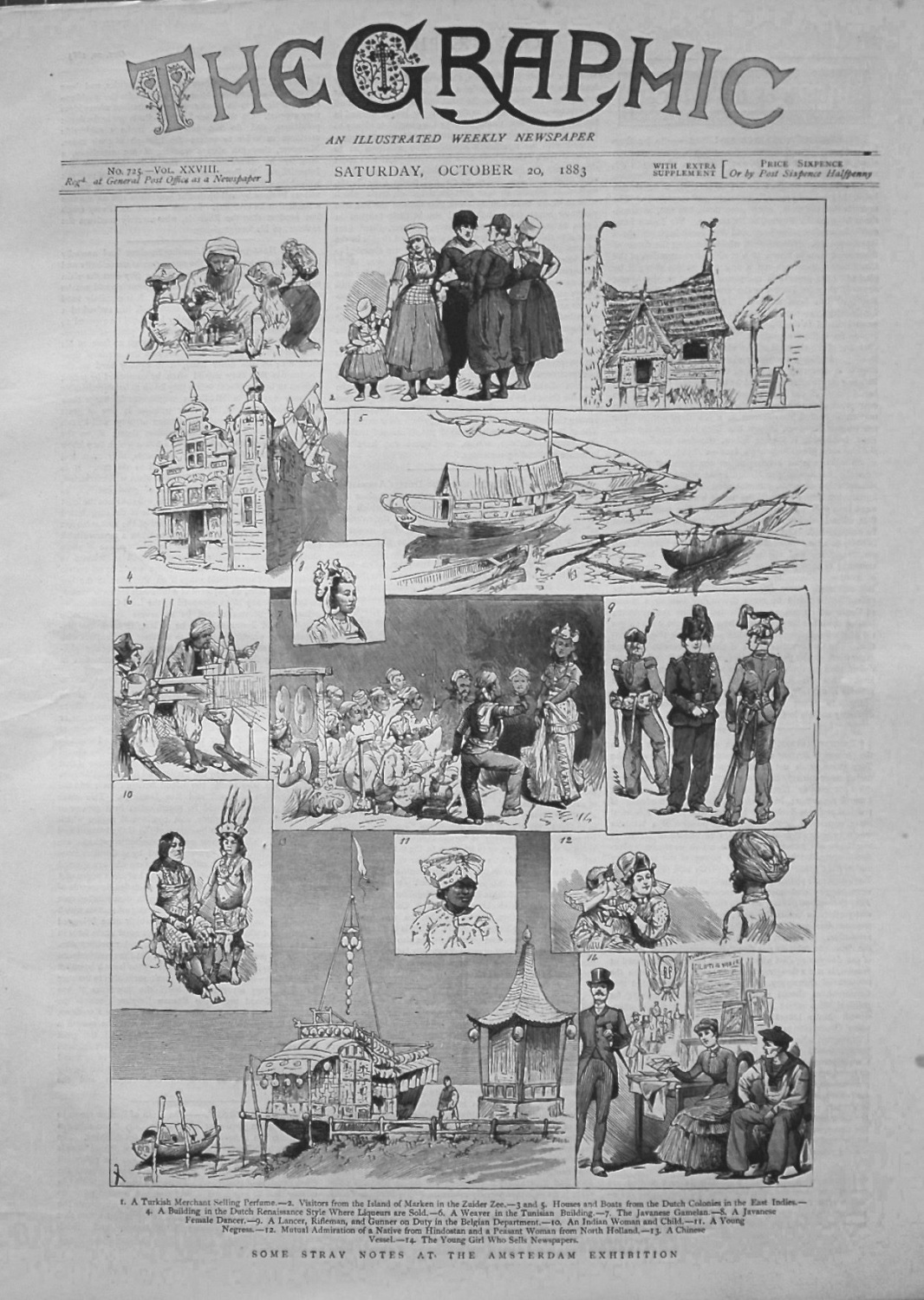 For Sale is an Issue of "The Graphic," October 20th 1883. This issue contains 13 Pages, 26 Sides, and has been taken from a Bound Volume, therefore the Binding holes are showing.

Engravings.
1- Front Page shows the following Engraved Sketches of "Some Stray Notes at the Amsterdam Exhibition."
a- A Turkish Merchant Selling Perfume.
b- Visitors from the Island of Marken in the Zeider Zee.
c & d- Houses and Boats from the Dutch Colonies in the East Indies.
e- A Building in the Dutch Renaissance Style Where Liqueurs are Sold.
f- A Weaver in the Tunisian Building.
g- The Javanese Gamelan.
h- A Javanese Female Dancer.
i- A Lancer, Rifleman, and Gunner on Duty in the Belgian Department.
j- An Indian Woman and Child.
k- A Young Negress.
l- Mutual Admiration of a Native from Hindostan and a Peasant Woman from North Holland.
m- A Chinese Vessel.
n- The Young Girl who Sells Newspapers.

4- Engraving showing "The Revolution in Hayti - View of Port-Au-Prince."
(With Descriptive Text).

5- Half Page Engraving for "The Constitutional Crisis in Norway - View of the Court at Christiania in which the Norwegian Ministry is being Impeached."
(With Descriptive Text).

6- Full page Colour Engraving called "The Rivals" from the Picture by E.K. Johnson.

7- Full Page showing the following Engraved Sketches for "The Hex River Railway, Cape Colony." (With Descriptive Text).
a- From Platelayer's Cottage.
b- Tulbagh Pass by Moonlight.
c- The Stoker has a Little Refreshmant.
d- A Farm by the Way, Hex River Valley.
e- The Boer Way of Travelling on the Railway.
f- Platelayers on a Trolly.
g- Hex River Mountain.
h- Near a Viaduct, Past Twenty-five Mile Cottage.

9- Half Page showing 2 Engravings called "The Portland 'Bus," or Steam Launch Attached to H.M.S. "Hercules," in Fair and Foul Weather. (With Descriptive Text).

10- Map showing "The French in Madagascar-Plan of Tamatave, Showing the Amount of Property Owned by Different Nations." (With Descriptive Text).

11- Half Page showing 6 Engraved Sketches of "An Overland Journey from Queensland to Sydney with a New Chum." (With Descriptive Text).

14- Engraving drawn by William Small called "She Laid Her Hand Upon Her Brother's Shoulder."

Condition is Very Good, with Light Foxing Spots in the Margins.