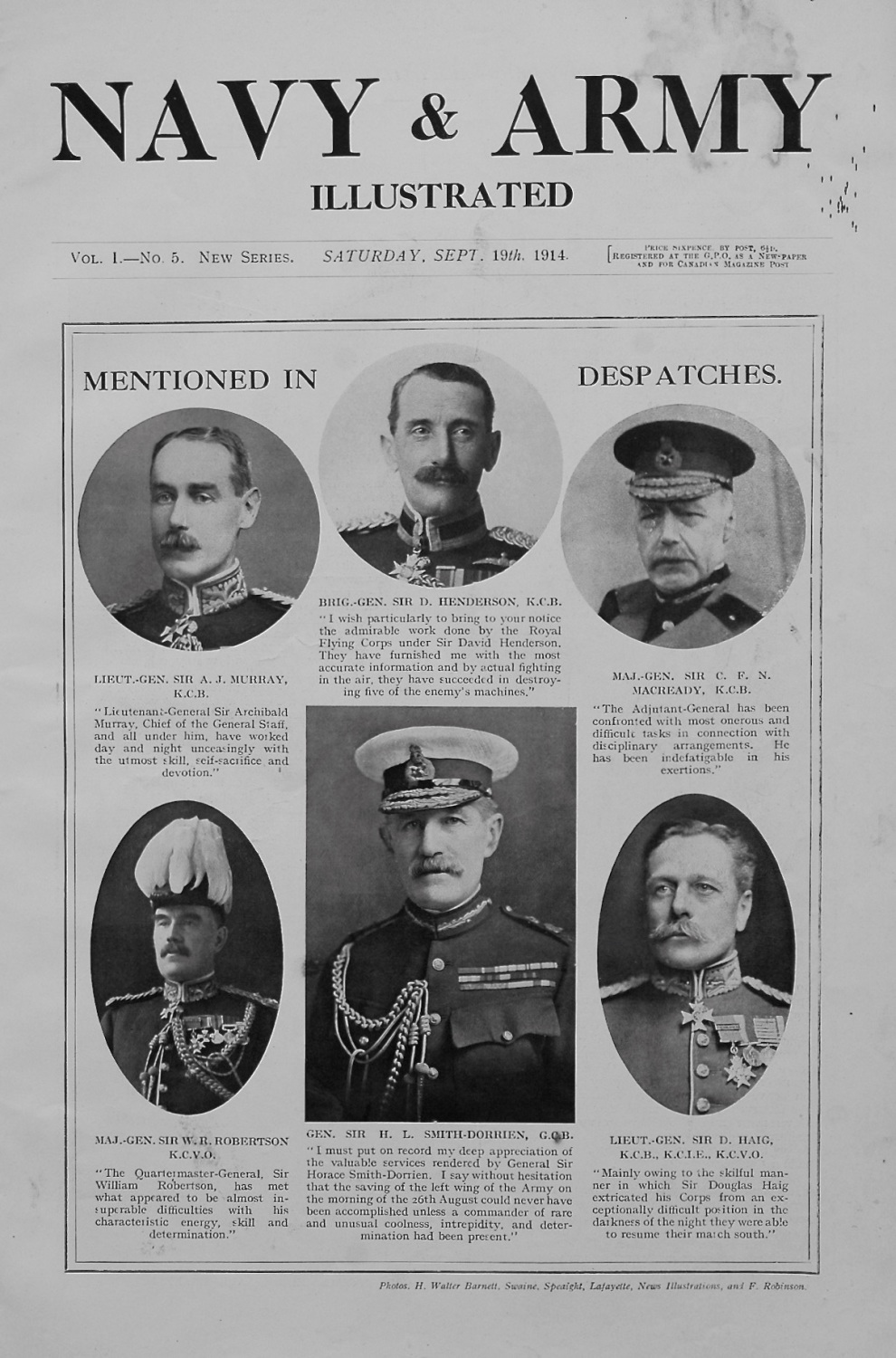 For Sale is an Issue of "Navy & Army Illustrated," September 19th, 1914. This issue has been taken from a Bound Volume, therefore, the Binding Holes are showing.

Condition of the Text is Very Good, the first six pages have a Damp Stain to the top margin, otherwise condition is Very Good.

Articles.
1- The Cossacks of the Czar.

3- The German Army in the Field.

7- The Eye of Modern Warfare.

8- Cavalry in the Great War.

2- The Cossacks of the Czar. Showing the following small Photographs.
a- Cossacks from the Don.
b- Types of Cossack Officers.
c- Typical Cossacks.
d- How Cosscack Horses are Branded.
e- A Cossack from the Caucasus.
f- A Group of Cossacks Exercising.

4- Full Page Photograph called "The Huns Within the Gate. German Troops Lined Up in the Grande Place, Brussels."

5- The German Army in the Field. Showing the Following Photographs.
a- German Cavalry Charging.
b- On the March.
c- A Charge of Cuirassiers.
d- German Infantry in the Trenches- The Modern Phalanx.
e- Masses of German Infantry on the March.
f- A German Trench.
g- The Battle Line.

8- The Sack of Louvain. Showing the following Photographs.
a- All that is left of the University of Louvain.
b- The Dismal Ruins of the World-Famed Library.
c- "Blind Barbarian Vengeance." Showing a General View of Louvain as it was left by the Germans. (Full Page)

10- The Eye of Modern Warfare. Showing the following Photographs.
a- Maxim Gun Mounted in an Aeroplane.
b- How Bombs may be Carried upon a Aeroplane.
c- A Method of Dropping Bombs.
d- Stern View of a Seaplane.
e- A Seaplane of the "Short" Type.
f- "The Seaplane of the Fleet." Seaplane "77," with Lieutenant C.F. Kilner, R.N.A.S., flying over the Fleet. (Full Page)
g- Naval Seaplane Among the Clouds.
h- British Aeroplane  Equipped with an Automatic Gun.

11- Cavalry in the Great War. Showing the following Photographs.
a- The Scots Greys.
b- A Charge by the Famous Uhlans.
c- Horses being held under cover whilst Dismounted Troopers are in Action.
d- Cavalry Dismounted and in Action.
e- Officers and Men of the Kaiser's Famous Death's-Head Hussars. (Full Page)

15- Photograph showing "Wing Commander Charles R. Samson of the Royal Naval Air Service with some of his Staff at the Eastchurch Naval Flying School."