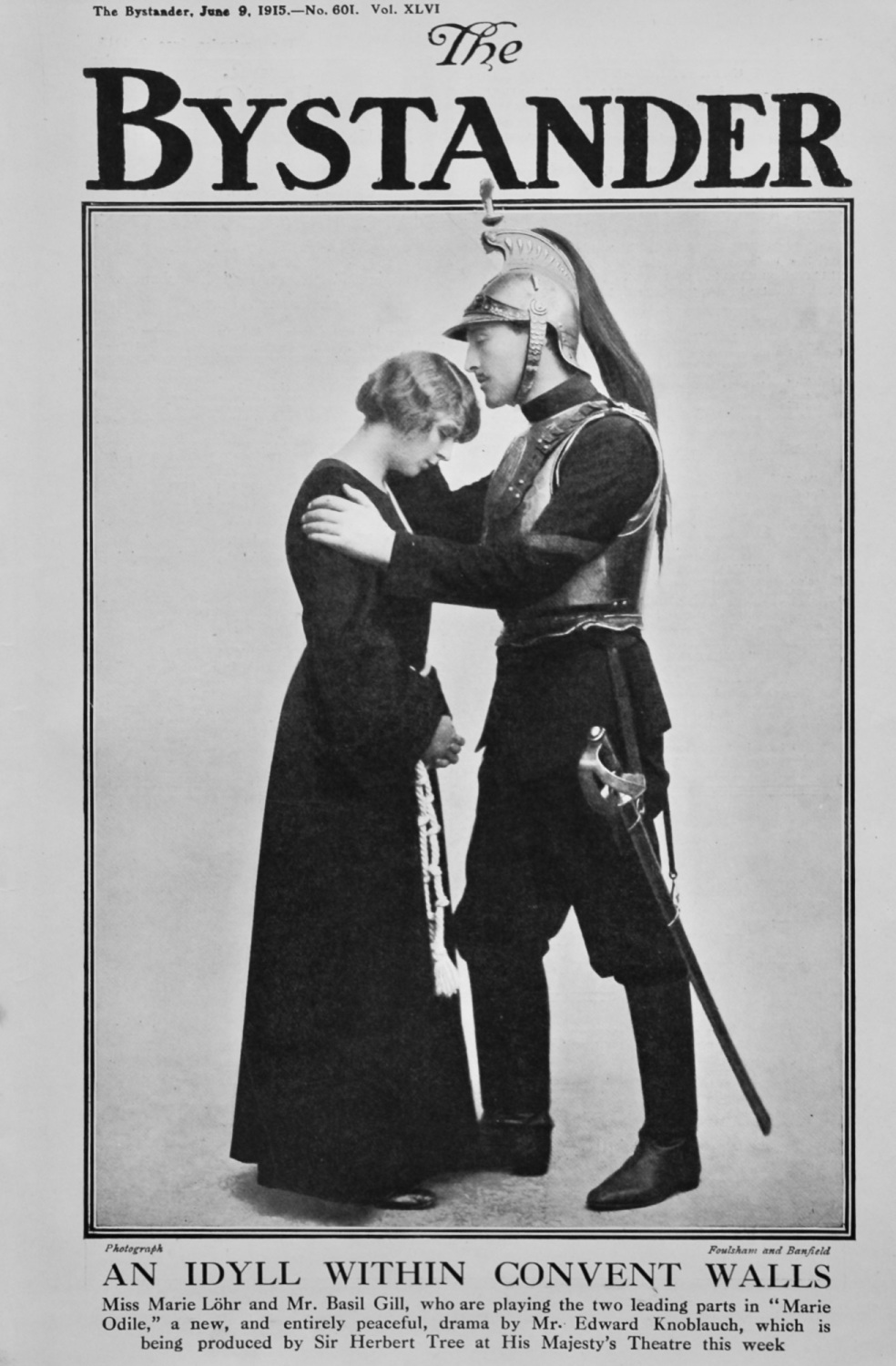 This Copy has 20 Pages,40 Sides, it was takem from a Bound Volume and therefore has Binding Holes showing.

Front Page is a Photograph called - "An Idyll Within Convent Walls" - showing Miss Marie Lohr and Mr Basil Gill, who are playing the two Leading parts in "Marie Odile," a Drama by Mr Edward Knoblauch, which is Produced by Sir Herbert Tree at his Majesty"s Theatre this week.

Bystander War Comments - by the Editor.

"Preparing for our Doom"- or, how we cower before a Threat to "Strafe" us. Full Page of 5 Sketches by a Bystander Artist.

Full Page Sketch by Donald Maxwell called "A Shower of Paper" How the News of the Explosion of the "Princess Irene" Reached a distant Village.

"No Shaming of Conscripts" - Compulsory Service an Honour not a Disgrace. by V.C.

"Zeps and the Countryside" - How Life goes on in an East Coast Village.

"Furor Anti-Teutonicus" - By The Bystander in Milan.

Full Page Photograph Called "On The Road to Cortina"- A View of the Della Mauria Pass, difficult Country which the Italian Troops have Traversed.

Full Page Photograph Called "By the Seaside - in Gallipoli"- A View of "V" Beach taken from the Steamship "River Clyde" by the Official photographer to the Dardanelles Expedition.

Full Page Portrait of Miss Moya Mannering who is playing "Victoria" in "To-night's the Night." at the Gaiety Theatre.

"The Salons as Usual" by the Bystander in Paris.

The Weekly Feature - "Books of the Week" by R.S.

London Nights Entertainments "Armageddon" at the New Theatre. a Revue by "Jingle' and Illustration by Norman Morrow.

The Weekly Feature "Racing Notions"- The New Derby. by Carbine.

Half page Advert for - The Royal Insurance Co Ltd.

"A Motoring Census" by Alex.J.Gray.