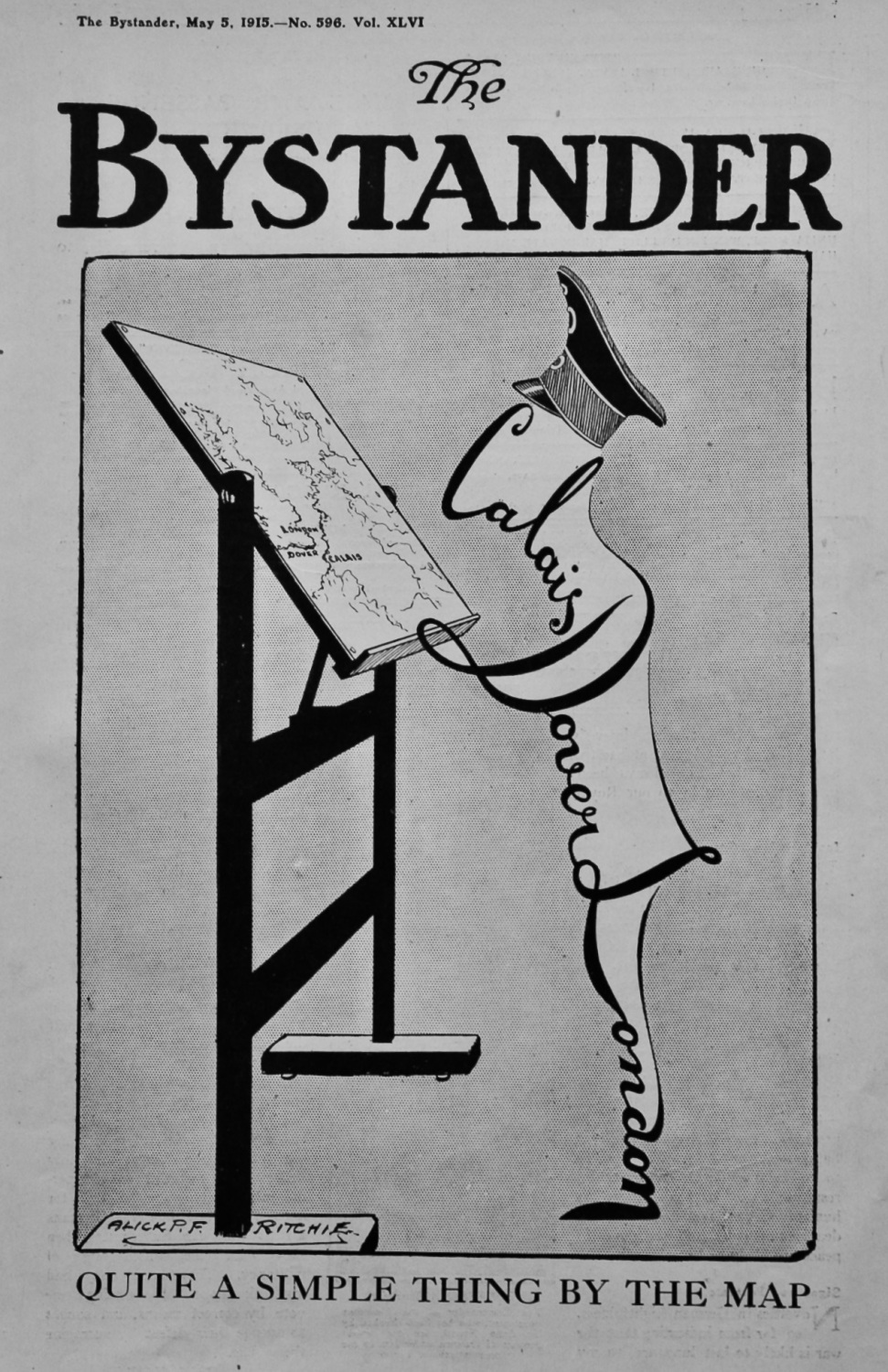 Front Page is called "Quite a Simple thing by the Map" A Drawing by Alick P.F.Ritchie.

Bystander Comments by The Editor.

Half Page Photograph called  "Under Canvas at Last."

Full Page showing Three Photographs called "Sunshine and Viceregal Smiles" -Enhance the pleasures of Punchestown Races showing Lady Wimborne and the Marquis of Headfort,  Lord Wimborne and Lady Headfort in the Hunt Stand,  and a  general view of the Stand during the Race for the Kildare Cup.

"The Academy as Usual"-  by Egan Mew.

Full Page Photograph of a Painting in the Royal Academy called "Spring Morning" by George Henry. This Page has a Library Stamp in the top Margin.

The War Touch in the Academy. showing Two Half Page Pictures - "Tipperary " by John Charles Dollman. and "Ought i To Go ?" by Stanhope Forbes.

"A Plea for a Total Censorship"as an Aid to the Restoration of Peace. by Downwriter.

A Line to " Tommy " concerning the New Musical Play at Daly's. by The Bystander.

"Somewhere in Flanders" - A Weekly Letter from an Officer at the Front, by Jack Johnson.

Double Page Drawing by Williams called "Air Raiders in the Making." -showing Changing the "CREW" at the Seaplane School on Windermere, without stopping the Engine.

Half Page Photograph of Canadian Heroes at the Front,- Officers of the 1st Royal Montreal Regiment.

Full page Cartoon "The Wooing of Mary Ann" - A Tale without Words but the usual Moral.

"Women and the next War" - by A Stranger Within.

Full Page showing Photographs of Two of the Principle Actresses in "To-night's the Night " the new Musical PLay at the Gaiety Theatre. Miss Peggy Kurton, and Miss Julia James.

Short story " Who Belled the Cat ?" by Esquire.

"War and the Country House" - how we " took all Labour for our Province."

Full page Photograph of Miss Gladys Cooper ; from a Painting by the Hon.John Collier which is in the Royal Academy.

London Nights Entertainment "The Argyle Case " at the Strand Theatre. by "Jingle."

Full page of Sketches called "Fingerprints and Forgeries" by Norman Morrow of  the play "The Argyle Case" at the Strand Theatre.

Half Page Advert for Dickins & Jones.

Half Page Advert for D.H.Evans and Co Ltd.

Motoring in Quest of Perfection by Alex.J.M.Gray.