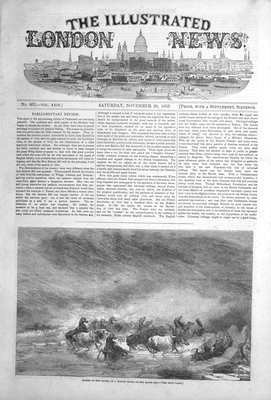 This Copy has 12 pages, 24 sides, it was taken from a Bound Volume and therefore has the Binding Holes showing. This copy has the Red London News Stamp on the inside of Front page.

Front page shows an Article on Parliament Reform, together with an Illustration called " Horses of the crimea in a Winter Storm."

The War between Russia and Turkey.

Commencement on the European and North American Railway.

Literary Miscellanies. - No 8. " A Speculative Bishop."

Half page illustration of the " Cossacks of the Don."

Illustration of the Church of St George, at Bucharest.

The Greek Church.  with an Illustration of the Virgin and Child.

The Late Mr. Gardiner, of Leicester.

Chess Talk, and Problem No 511. Together with a Match between Harrwitz and Lowenthal.

Partial Destruction of Lismore-Bridge. - Showing a photograph taken during the recent Floods.

Obituary of Eminent Persons.
The Princess Nicholas Esterhazy.
The Late Donna Maria Queen of Portugal.
The Duke of Beaufort.

Testimonial to the Head-Master of the Birmingham School of Design.

J. E. Millais, A.R.A. - showing a portrait taken from a Medallion recently sculptured in Marble by Mr. A. Munro.

The Cottonian Public Library, Plymouth. - With a Half Page Illustration.

Engraving showing The Black Sea, Battery and Lighthouse at the entrance to the Bosphorus.

Statue of Humphrey Chetham, at Manchester. with Engraving.

Monument to the Scotch Political Martyrs. With Engraving.

Marshes on the Banks of the Thames. With Engraving showing a View over Plumstead Church.