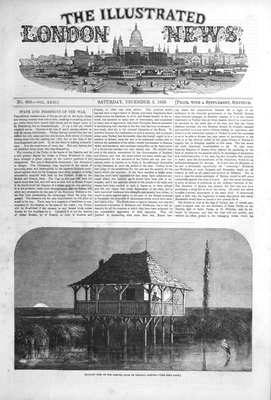 This Copy has 10 pages, 20 sides, it was taken from a Bound Volume and therefore has the Binding Holes showing.

Front page is an article about the State and Prospects of the War. Also a Half-Page Engraving called "A Military Post on the Danube."

The War between Turkey and Russia.

Engraving of General Arista,- from a Painting by Miss A. Laird.

Town-Hall in course of Erection at Leeds. Together with a Half-Page Engraving.

Nooks and Corners of Old England.

Chess Talk, with Problem No 512. and a Match between Messrs, Lowenthal and Harrwitz.

Funeral of the Duke of Beaufort.

Calendar for the Week.

The Battle of Oltenitza, - With Half Page Plan of the Battle.