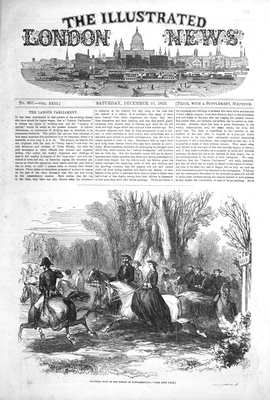 This Copy has 12 pages, 24 sides, it was taken fron a Bound Volume and therefore has the Binding Holes showing.

Front page shows an Article called "The Labour Parliament." -also a Half Page Engraving called " Imperial Hunt in the forest of Fontainebleau."

Wreck of the " Meridian."

The Corporation of London City Improvements.

Epitome of News - Foreign and Domestic

A Double page of 4 Engravings by H. Weir, with Article called the  Smithfield Club Prize Cattle.

The American Reaping and Separating Machine, with Sketches.

Fat Stock and the Smithfield Show.

Royal Present to a British Officer.

London and Blackwall Railway. - Enlargement of the Fenchurch-Street Station.

Testimonial to Mr. Watkin, of the London and North-Western Railway.

Chess.-Problem No 513.and a Match between Messrs, Lowenthal and Harrwitz.

Improved Short-Horns.- With Half Page Engraving.

News of the Week from The I.L.S.

Music and Song - King Alfred, with Poetry by Charles Mackay, and Symphonies and Accompaniments by Sir H. R. Bishop.  Air, " My Lodging is on the Cold Ground."

Favourites of the Royal Stud. - A full page Engraving by Smyth. This is a Group of Horses from Her Majesty's Stables.  Her Majesty's Riding Horse.  A Grey Mexican Pony,Paquita.  Her Majesty's Black Charger.  Hyperion.  The Prince of Wales Pony,Caspar.  Grey Arab,Khorseed.  A Brown Arab, Said.