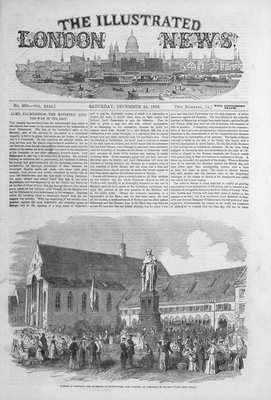 Front page has an Article called - " Lord Palmerston, The Ministry, and War in the East."

Monument to Schwarz, at Freiburg.

The War in the East.

The Late Queen of Portugal.

The " Dunbar " East Indiaman. with Engraving of the Ship.

Mademoiselle Georges, of the Theatre Francais.

The Emperor of Russia in his Droshky,(Sledge,)at St.Petersburg. With Half Page Engraving.

Russian Gate at Kalougerini. With Half Page Engraving.

Half page Engraving of General Prim, in Bivouac, at the Battle of Oltenitza.

Restoration of the Paintings in the Dome of St. Paul's Cathedral. With Three-Quarter page Engraving. Also a Full page of 8 Engravings,-
1- The Burning of the Books, at Ephesus.
2- Paul before Agrippa.
3- The Punishment of Elymas, the Sorcerer.
4- The Shipwreck on the Island of Melita.
5- Paul Preaching at Athens.
6- The Cure of the Cripple, at Lystra.
7- The Conversion of the Gaoler.
8- The Conversion of St. Paul.