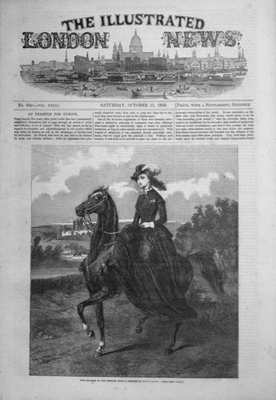 Front page shows an Article called "An Example For Europe." Together with an Engraving of an Equestrian portrait called "The Empress of the French." from a picture by Louis David.

The Baths of Lucca.

The Drug Bazaar at Constantinople.

Chess Talk, and Problem No 505. with Match between Messrs, Lowenthal and Harrwitz.

The Crypt of St. Paul's.

Grand Field Day on Roborough Down.

Recovery of the Hungarian Crown.

Discovery of the North-West Passage.