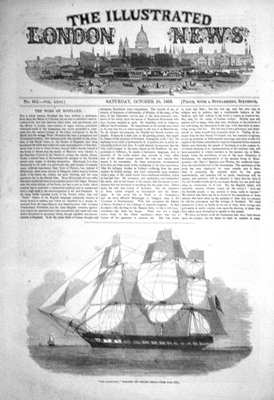 Front page shows an Article called " The Woes of Scotland."  Also an Engraving of the Ship " The Dalhousie," Wrecked off Beachy Head.

Captain Lakeman, of the Waterkloof Rangers.

H.M.S. " Investigator," in the Arctic Regions.

Officers Commanding in the French Squadron of the Levant.

Widden, in Bulgaria, on the Danube.

The Fair of St. Peter, at Giurgevo.

The Theatres.
News from, -  Haymarket, Drury-Lane,

Perilous situation of the Steam-Packet " Dispatch, " at Guernsey.

Frightful Accident on the Medway.

Consecration of the Church of St. Paul, at Grange, Lancashire.

"Plot and Passion'" at the Olympic Theatre.

Chess Talk, with Problem No 507. and a Match between Messrs,. Lowenthal and Harrwitz.

Attack upon the Australian Gold Escort.