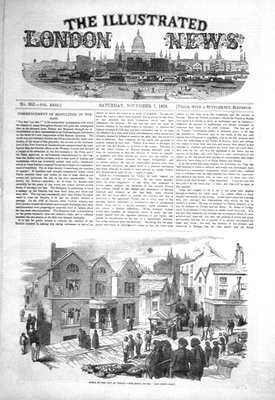 Front page shows an Article called " Commencement of Hostilities in the East." Together with a picture of the Scene of the Riot at Wigan. - The Royal Hotel.

Double page on the Civil War in China. - H.M.S. " Hermes " in the Yang-Tze-Kiang River.

Chess Talk, with Problem No 508. Also Match between Messrs. Lowenthal and Harrwitz.

Sketch of the Turkish Pacha and his Wife.

View on the Bosphorus.

Map of the Scene of War on the Danube.

The Recent Land-Slip on the London and Brighton Railway.

The Burmese War. - Departure of General Godwin from Prome.

Close of the Dublin Industrial Exhibition.

Consecration of the Church of St. Michael, Cherry-Burton, Yorkshire.

Engraving of Presentaion of an Address to Lieutenant Cresswell, R.N., at Lynn.

Recollections of the Fifth of November. By Horace Mayhew.