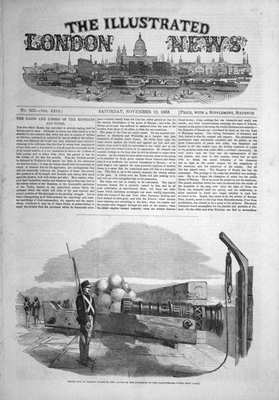 Front page  Article is called " The Gains and Losses of the Russians and Turks." Also a Half Page Engraving of the Great Gun at Chanak Kaleh-Si, the Castle of the Govenor of the Dardanelles.

The Great Guns of the Dardanelles.

Hostilities between Russia and Turkey.

The North-West Passage.
With a Chart of the Arctic Regions showing the North West Passage connecting the Atlantic and Pacific Oceans.

Sketches of Strikes and Riots in the Cotton Districts.

The Theatres.
News from the - Lyceum, Marylebone.

Chess Talk, with Problem No 509. and a Match between Messrs. Harrwitz and Lowenthal.

Destructive Inundations at Cork and Mallow.

The Cabin on the Grand Mulets, Mont Blanc. With a Sketch by Albert Smith.

" The Song of the Danube," With Words by Charles Mackay, and Music by C.W.Glover.

Lord Mayor's Day, - The Banquet at the Guildhall.