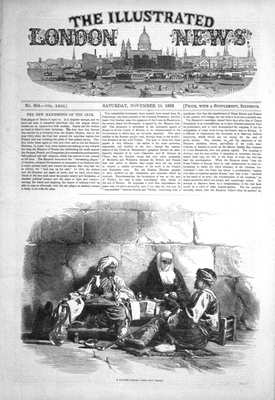 Front page has an Article called " The New Manifestos of the Czar." also a Half Page Engraving called -" A Turkish Scribe."

Hostilities between Turkey and Russia.

Her Majesty's New Steam-Yard, at Keyham.

The Theatres.
News from the - Haymarket, Adelphi, and Lyceum.

The Hall of Assembly of the Boyards of Wallachia.

Etching of Peter the Great.

Chess Talk, with Problem No 510. and a Match Between Messrs Lowenthal and Harrwitz.

Corporation Management in the City of London.

The Will of Lieutenant-General Sir Charles James Napier.

The British Fleet in the Turkish Waters.