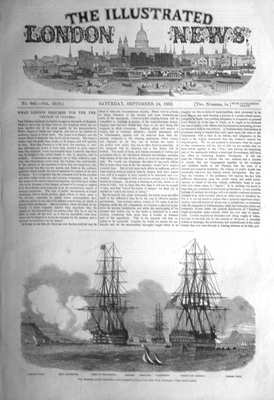 Front page shows an Article called " What London Requires for the Prevention of Cholera."

The Channel Fleet at Queenstown.

The Future Government of India.

Boar-Hunting in the East Indies.

The British and French Fleets in Besika Bay, August 1853.

The Golden Horn and the Falls of the " Sweet Waters of Europe."

Consecration of the English Protestant Church at Geneva.

Map of China.
Showing the Position of the Provinces and Towns under Insurrection.