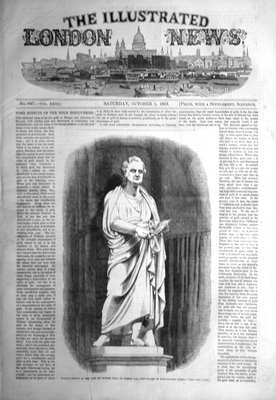 Front page shows an Article called - " Some Effects of the Gold Discoveries."

Lord Palmerston at Perth and Glasgow.

Appearance of the Comet in the United States.

The Grand Opera at Paris.

Launch of the "Contest" Clipper-Ship.

The Cholera, and Measures of Counteraction.

Commencement of the Ballymena and Portrush Railway.

The Theatres, &c.
Drury-Lane. and the Linwood Gallery Leicester Square.

Chess Problem No 503. and Match between Mr. Petroff and Prince Ouroussoff.

The Case of Miss Cunninghame.

The French Emperor's progress in the North of France.

Meeting of the Emperors of Russia and Austria.