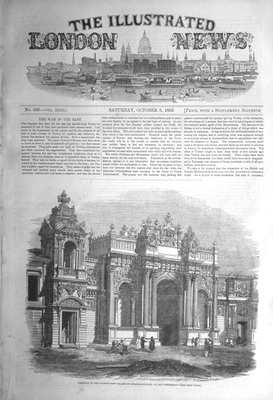 Front page shows an Article called " The War in the East." together with an Engraving of " The Gateway to the Sultan's New Palace of Dolmabaghdsche, on the Bosphorus.

Declaration of War by Turkey.

Loss of the Steamer "Quito."

Tour of the Emperor and Empress of The French in the North of France.

Full page Sketch of the " Visit of the Emperor and Empress of the French to Boulogne. - Grand Ball in the theatre.

Our Magazine Column for October.
1-Effects of the Chinese Revolution.
2-The Lottery.
3-The United States in 1853.
4-A Lord Chancellor in Full State.
5-Paris and London Compared.
6-The Gipsy Slaves of Wallachia.

Civic Tenure Custom in the Court of Exchequer.

Laying of the Foundation-Stone of the Victoria Pier, Queenstown.

The Strait of the Dardanelles.

Chart of the Positions of the Ships of the Turkish Fleet in the Bosphorus.

Full Page showing 3 Engravings of the Dardanelles.- Asiatic Side.

Chess Talk,- Problem No 504. - and a Match between Messrs, Lowenthal and Harrwitz.