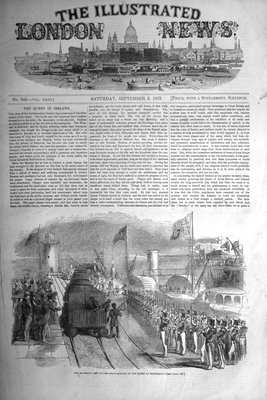 Front page shows an Article called " The Queen in Ireland." Together with an Engraving of the Queen Arriving at Holyhead.

Wreck of the " Larriston " Screw Steamer.

The Diggings, and Life in Australia.

Epitome of News.- Foreign and Domestic.

Full page Engraving of The Reception of Her Majesty at Kingstown.- The Royal Salute.

Chess Talk,- With Problem No 499, and Match  Mr Staunton Versus  M.de Rives.

The Theatres.
Sadler's Wells, and the Lyceum,

Our Magazine Columns for September.
The Roman Villa at Bignor.
"Old Milton."
The Chancery Suits of "Bleak House."
The Shakspeare Emendations.
Lament for the Decay of Fox-Hunting.
Theatrical Failures.
Anticipations of a First of September.
The Theatrical Exchange in Paris.