Rebellion in the Soudan. 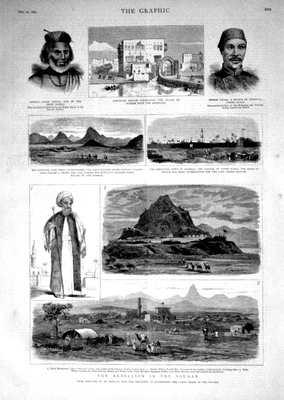 For Sale is a Full Page from "The Graphic," December 22nd 1883. Showing a full Page of 8 Engravings for "The Rebellion in the Soudan," from Sketches by an Official who was employed in suppressing the Slave Trade in the Soudan.

1- Sheikh Osman Dekna, one of the Chief Rebels.

2- Fortified Bridge connecting the Island of Soakim with the Mainland.

3- Zebehr Pasha, a Native of Dongola, lower Nubia. Commander-in-Chief of the Bedouins and Negroes acting against the Mahdi.

5- The Fortified Town of Kassala, the Capital of upper Nubia.

7- Sinkat, where Tewfik Bey, Governor of the Soudan, is Entrenched, Awaiting Aid.

8- Toka, where Commander Moncrief was Killed, and where some three hundred Egyptian Soldiers and Bashi-Bazouks were surrounded by the Rebels.