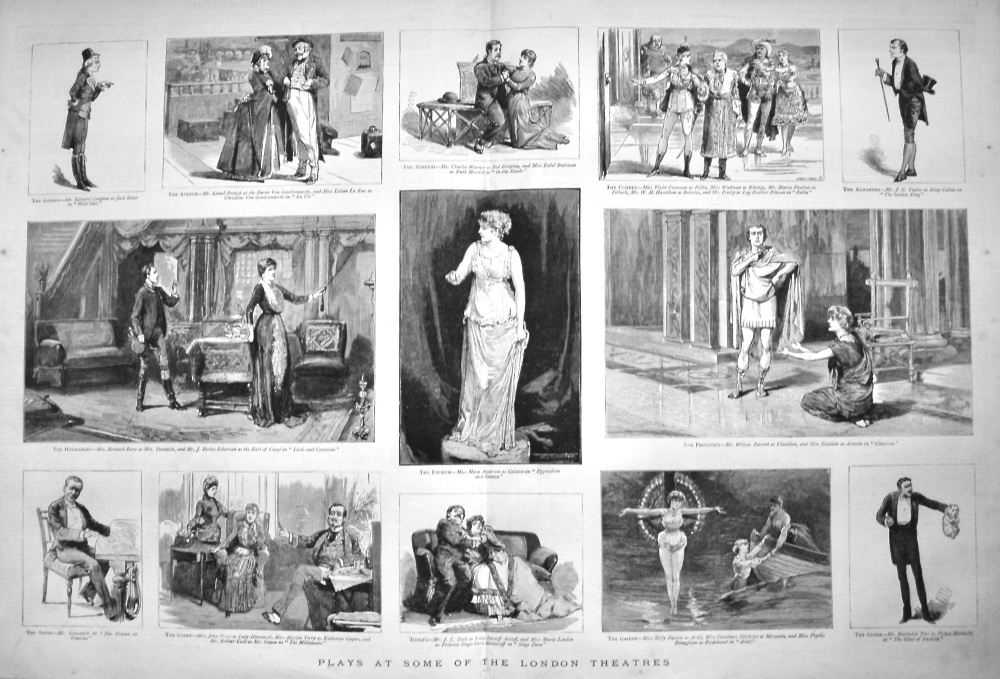 For Sale is a Double page removed from "The Graphic, December 22nd, 1883," showing the Following 13 Engravings of Sketches for "Plays at some of the London Theatres."

3- The Adelphi, - Mr Charles Warner as Ned Drayton, and Miss Isabel Bateman as Ruth Herrick in "In the Ranks."

6- The Haymarket,- Mrs. Bernard Beere as Mrs. Devenish, and Mr. J. Forbes-Robertson as the Earl of Caryl in " Lords and Commons."

7- The Lyceum, - Miss Mary Anderson as Galatea in " Pygmalion and Galatea."

8- The Princess's - Mr. Wilton Barrett as Claudian, and Miss Eastlake as Almida in " Claudian."

10- The Court, - Mrs. John Wood as Lady Henmarsh, Miss Marion Terry as Katherine Guyon, and Mr. Arthur Cecil as Mr.Guyon in " The Millionaire."

12- The Gaiety - Miss Nelly Farren as Ariel, Miss Constance Gilchrist as Miranda, and Miss Phyllis Broughton as Ferdinand in " Ariel."

13- The Globe, - Mr.Beerbohm Tree as Prince Borowski in " The Glass of Fashion."