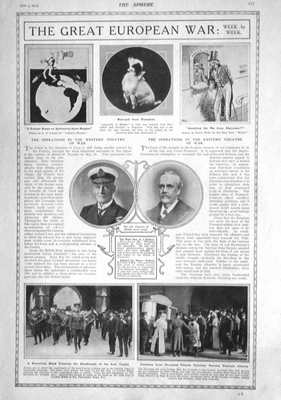 For Sale is a Full Page removed from "The Sphere, June 5th, 1915," called "The Great European War : Week by Week," showing the Following Articles with Photographs and Drawings.

A Cartoon called - " If Europe keeps on Increasing those Ranges. "
Drawn by F.G. Cooper for "Collier's Weekly"

A Cartoon called - " Anything for me from Germany ?"
Drawn by Rollin Kirby for the New York "World.

A Picture called - "Rescued from Festubert."

" Jeannette La Bassee " - a little Dog rescued from Festubert and brought to England. This Dog and a Cat were the only animals left alive in the Village by the Germans after they abandoned it.