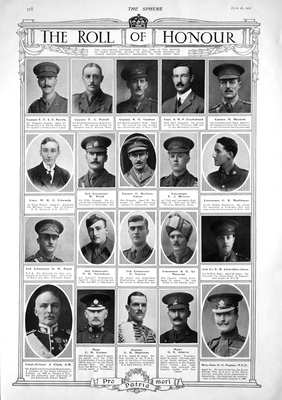 For Sale is a Full Page removed from "The Sphere, June 26th, 1915," called "The Roll of Honour," showing the Following Portraits of Servicemen who have lost their Lives during the War.

The Following Officers have all died in the service of their Country. Either in
Action, from Wounds, or other causes directly incidental to the Great War.

Captain H. Haylock. 4th Leicestershire Regiment. Aged 41. He transferred from
the Yeomanry to the Territorial force 6 years ago.

Lieutenant C.R. Macgregor. South Wales Borderers. He joined the Regiment
in February 1912 and was promoted Lieutenant in September 1914.

2nd Lieutenant G.W. Pigott. R.F.A. He obtained his first Commission in the Essex
Regiment. Only child of Major and Mrs. Wellesley Pigott.

Brig.-Gen. G.C. Nugent, M.V.O. Aged 51. He served during the South African
War as A.D.C. to Sir Henry Colville, and was twice mentioned in despatches.
He obtained his Commission in the Grenadier Guards in 1882.

Lieutenant Colonel J. Clark, C.B. 9th Argyll and Sutherland Highlanders. A
member of the Royal Company of Archers. In 1908 he became a K.C. and the
following year chairman of the Edinburgh School Board.

Major C.H. Corbett. 18th Hussars. Aged 47 years. He served with the Tirah
Expeditionary Force in India, 1897-8, and during the South African War.
He joined from the Militia in 1888, becoming Major in November 1904.

Captain G.H. Merriman. R.F.A. Aged 30 years. He first served in the R.H.A., and,
at the time of his death was in temporary command of a Field Battery. R.F.A.