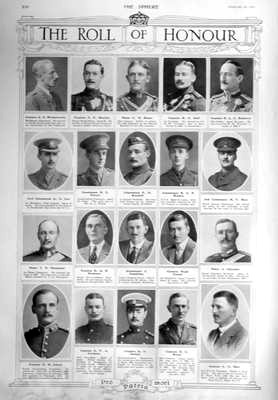 For Sale is a Full Page removed from "The Sphere, February 20th, 1915," called "The Roll of Honour," showing Portraits of the Following Servicemen who lost their life in the War.

Captain A.G. Wordsworth. Middlesex Regiment. He served in South Africa and
took part in the Operations in the Transvaal.

Major C.M. Dixon. 16th Lancers. Killed in action. He was attached to the
Special Reserve of the 16th Lancers.

Captain E.R. Lloyd. Royal Inniskilling Fusiliers. He joined the Regiment in
October 1902. Becoming Lieutenant in January 1905, and Captain in February
1912. He was appointed adjutant in August 1911.

Captain L.F.A. Cochran. 72nd Punjabis. Aged 32 years. Killed during the
fighting at Toussoum, on the Suez Canal. When only 17 years old he saw active
service in South Africa, receiving the Queen's medal with 3 Clasps.

Captain A.S. Nesbitt. Worcestershire Regiment. He joined as a 2nd Lieutenant in April 1900, becoming Lieutenant in December of the same year and Captain in 1904.

2nd Lieutenant L.C.Lee. 1st Battalion, Irish Guards. Aged 21 years. He was Gazetted to the Guards in September last from the O.T.C.

Major T. P. Dorington. 1st Royal Dragoons. He entered the Army in 1897. He was
a Son of the Late Major- General R.T.G. Dorington.

2nd Lieutenant H. V. Hutt. Royal Sussex Regiment. He joined the Army on the outbreak of War, leaving for the front in October last.

This page shows signs of Damp in the bottom Margin which has been Repaired with Tape. All the Contents of the Page is Clean.