The Hospital Nurse in France and Russia. 1915. 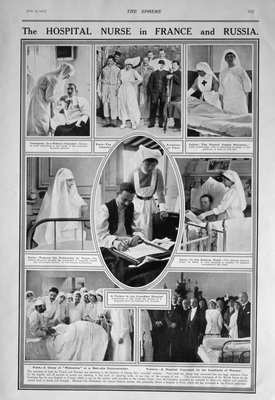 For Sale is a Full Page removed from "The Sphere, June 19th, 1915," showing the Following 8 Photographs for "The Hospital Nurse in France and Russia."

1- Petrograd : In a Military Hospital,- Sisters at work attending to the needs of
the wounded Russian Soldiers.

2- Paris : the American Hospital in Paris.

3- Calais : The Hospital Sophie Berthelot. - Lady Lethbridge, who is attending to
many of the patients, is seen on the left.

4- Paris : Madame Ida Rubinstein as Nurse.- The famous Russian Actress has
presented a Hospital, which she personally directs, to the French authorities.

5- Paris : In the Astoris Hotel.- The famous Astoria Hotel in Paris is now housing a
number of soldiers wounded at the front.

6- A Patient in the Canadian Hospital.- Explaining to his Nurse by means of a
diagram how he received his wounds.

7- Paris.- A group of " Midinettes " at a Bed-side Demonstration.

8- Warsaw. -A Hospital organised by the Landlords of Warsaw.