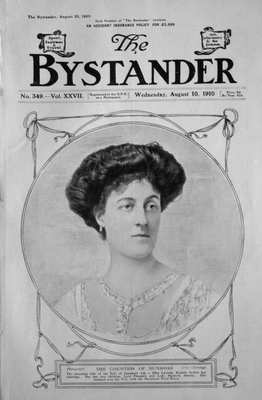 Copy has 26 pages, 52 sides, it was taken from a Bound Volume and therefore has the Binding holes showing.

Front page shows a portrait photograph of the Countess of Dunmore.

Cowes Attractions : Supposed and Real.
2 Half page Photographs from Cowes.

Photograph of the Opening Meet of the Devon and Somerset Staghounds at Cloutsham. : Sidney Tucker (Huntsman) and his Pack.

"La Vie Sportive."
Showing a Full page Drawing by Lewis Baumer. of an Impression at the Dieppe Races.

"The Look of Things " from a Bystander's point of view.

The Parvenu's Progress.
No 4. - His Youngest happens to mention " The Shop" in the presence of the Vicar's Wife.  A Cartoon Sketch by H.M.Bateman.

Literary Legends and Landmarks of London. By "Jingle."
Illustrated by Norman Morrow.

"A Passing Vision."
A Full page photograph of a Painting called " Passante." by Louis Picard.
An Attractive picture in the Paris Salon des Beaux-Arts.

Double page Photograph called " A Sunrise from the Summit of Monte Generoso (5590ft.)

"HOUSEY" : The Passing of a Great School.
Recollections of Christ's Hospital. By an "Old Boy."

Majestic Monte Rosa.
A Full page photograph by Donald McLeish, Showing Monte Rosa, from the Italian Side, above Macugnaga.

The Passing of Old Japan : An Ancient Bridge that Still Survives.
A Full page photograph showing a Bridge Spanning the River Nishiki, Japan.

" The Bystander" Short Story, "Into Thy Hands, O Woman!" by Douglas Newton.

The Library.
1- British Floral Decoration.
2- The House of the Sleeping Winds.
3- "The Colonel's Past."
4- A Fair Martyr.
5- "George Meek, Bath Chair-man." (Autobiography)

"Chasse A Tir" : By Louise Abbema.
A Full page Picture of a Pretty French Sportswoman ready for the Day's Shooting.

Shooting : A Word in Season. By Leonard Willoughby.

Half page Advert for "Odol."

Half page Advert for "The Dunlop Tyre Co Ltd."

The Garden. By H. C. Davidson.
1- Flowers and the Weather.
2- White Garden Lillies.

The Menu.
Vegetarian Dishes suitable for Hot Weather. By Emilia.