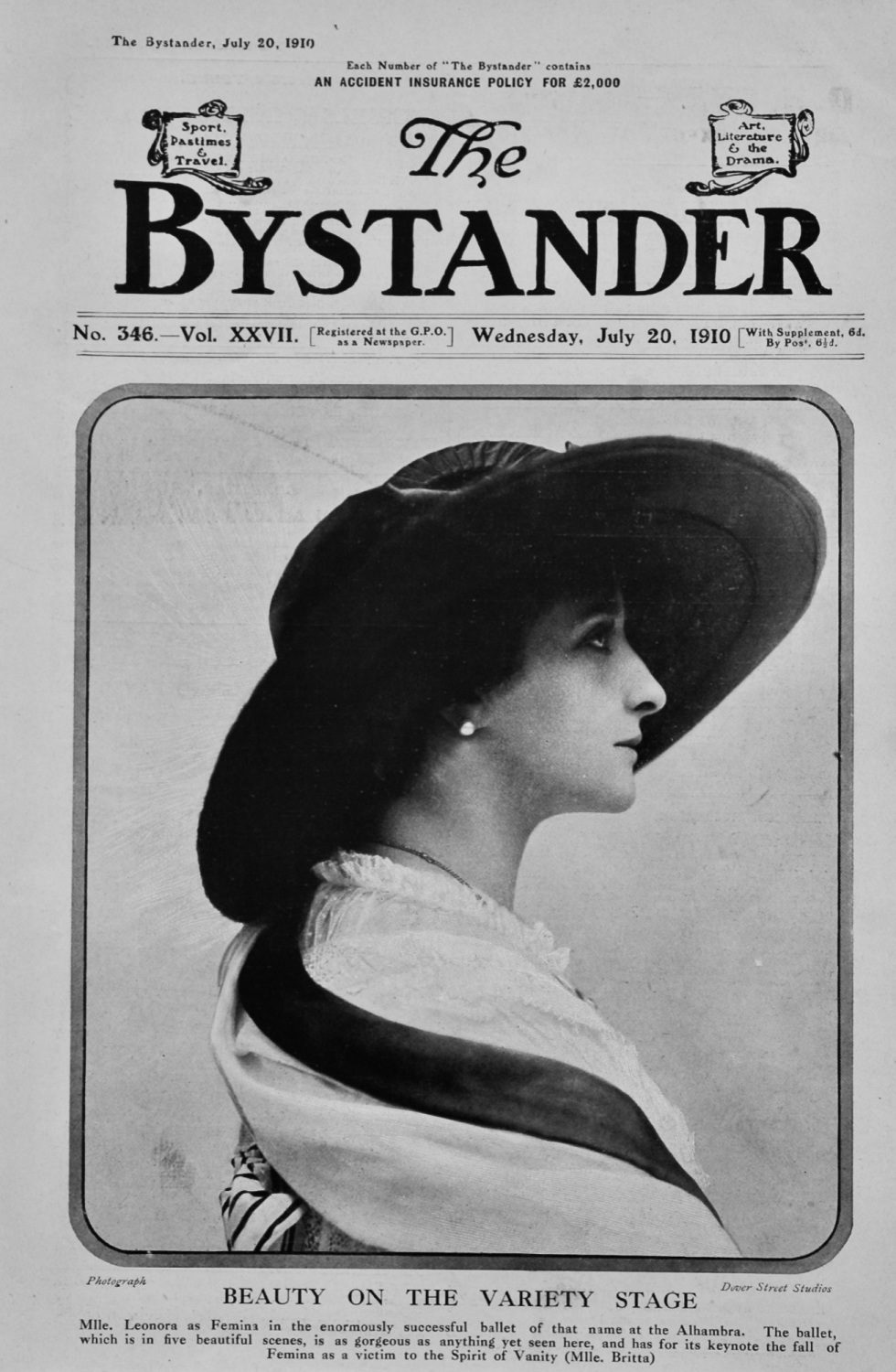 Copy has 23 pages,46 sides, it was taken from a Bound Volume and therefore has the Binding Holes showing.

Front page shows a Portrait Photograph of Mlle. Leonora as Femina in the enormously successful Ballet of that name at the Alambra.
Page is called,- " Beauty On The Variety Stage."

Photograph - Lemberg and Neil Gow Dead-Heat in the Eclipse.

An Elemental Hero.
Who Lived and Died at War with Leisure.
Full Page showing 5 Photographs of some Notable Incidents in the Brilliant Career of the Late Hon. C.S. Rolls.
1- Mr. Rolls as a Pioneer of Automobilism in this Country.
2- Driving a Car in the Historic 1,000 Miles Motor Trials.
3- Driving a Wolseley Racer in the 1905 Gordon Bennett Race.
4- The Last Sad Exploit. Mr.Rolls's smashed Aeroplane in the Aerodrome in
Bournemouth, photographed immediately after his Fatal accident.

" A Princess Among Fair Women."
Full page Portrait of "H.S.H. Princess Louis of Battenberg." : By Laszlo.

The Parvenu's Progress.
Golf on His Own Private Links. - Full page Cartoon Sketch by H.M. Bateman.

Americans in London.
Article,- "One of them Overheard" by "Jingle" with Sketches by Norman
Morrow.

"Revived with the Kiss of the Sea."
Holiday-Makers enjoying a Health-Giving Dip at a popular Seaside Resort.
Full page Photograph.

Whither Away ?
Full page Photograph "The Shrimping Girl." : A Lovely actuality on Cromer Beach.

Why Rest While Away.
Double page of Photographs showing how to Escape a Holiday That Will Do You Good.


Double page Photograph of the Boxing Match between Jeffries and Johnson, called - "The Fight That Failed" to bring Honour to the White Man and Credit to our Civilisation.   Picture shows the First " Knock-Out" of Jeffries : Referee Intervening.

Full page Drawing by E. Lander.
"The Wind that Blows, the Ship that Goes, And the Lass that Loves a Sailor."

Half page Advert for "The Orchestrelle Co.,

Where to Spend the Ideal Holiday.
With a Full page of Sketches by R.G. Mathews. Called "Select Broadstairs."
At which The King was Reported to have Purchesed a Residence.

Racing : Sandown and Liverpool. By Carbine.

Motoring By Land, Sea, and Sky.

The G.W.R.'S New Route to Birmingham.