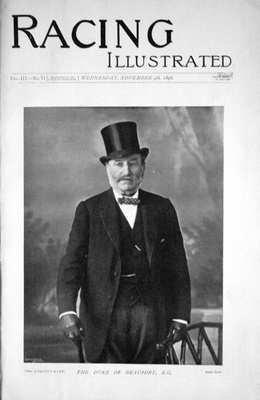 This issue contains 12 pages, 24 sides, and has been removed from a Bound Volume and therefore has the Binding holes showing.

Front page shows a portrait photograph of The Duke of Beaufort, K.G.


Articles include,-
Birmingham.
The October Meeting.
Together with three photographs
1- In the Paddock.
2- A Fancied Candidate.
3- On the way to Weigh In.

Juggler ; By Touchet out of Enchantress.
A Good Horse in his Day.


The Duke of Beaufort.


Done All Round. By John Warland.

An Australian Sportsman.
Mr. Spencer Gollan.
Article together with portrait photograph of Mr. Gollan, and his Jockey James Hickey.


Newmarket.
The Newmarket Oaks.
Together with Two photographs,-
1- Jolly Boat returning to Scale.
2- The Winner of the Lowther Stakes, "Bay Ronald."

Newmarket. "In the Sale Paddocks."
Showing Two photographs,-
1- The racehorse "Thessalian " ; by Wisdom out of Prickles.
2- The Green and Gold.


From The Other Side of the Atlantic.
Photograph showing Mr. Lorillard's Horses.


Half page photograph called,"On the Yorkshire Wolds."   Waiting for Orders.