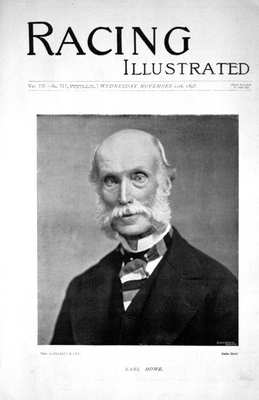 This issue contains 12 pages, 24 sides, and has been removed from a Bound Volume and therefore has the Binding holes showing.


Articles include,-
An Irish Three Year Old Filly.
A Photograph of "Rinvanny," by Kendal out of Deception.

Racecourse Scenes.
1- Photograph of Sandown Park. Under National Hunt Rules. "Over the Sticks." 2- Photograph of Colwick Park. "The Race of the Day."

Turf Notes. By Hippias.
Featuring a look at the current Racing scene.


The First Favourite.
A Novel in Twenty-Six Chapters. By John Trew-Hay.
Chapter XIX. - The key of the Gate.


A Derby Outsider.
Half page photograph of "Silver Fox," by Satiety out of Silver Sea.


A Classic Winner.
Half page photograph of "Kirkconnel," by Royal Hampton,out of Sweet Sauce.


On the Berkshire Downs.
Half page photograph called "A View from Seven Barrows."