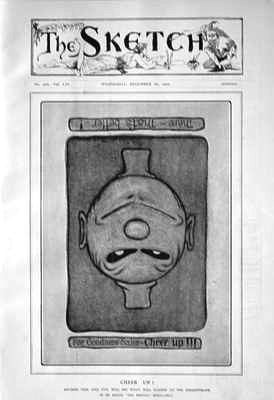 This copy has 17 pages, 34 sides, it was taken from a Bound Volume and therefore has the Binding holes showing.


"Professor ZigZag Shows How to Influence Others by Means of Telepathy."
Full page if Illustrations Drawn by Rene Bull.


"The Clubman."
Full page Article talking about,- A Brigand's Christmas Party. - The Birthdays of Mohammed and Buddha. - and Waits and Mummers.


Article called, "Small Talk of the Week." With Parapraphs on the Following,-
1- Some Christmas Bethothals.
2- An Earl of Nine Years.
3- A Future Sporting Duke.
4- Thinking Imperially.
5- A Paid Legislator.
6- Toys in Paris.
7- Piercing the Straits.
8- The Headstone of Art.
9- A Brilliant Ambassadress.
10- An Imperial Elder Son.
11- A Famous Amateur Lady.
12- Mr. Chaplin's Grandson.
13- An American Princess.
14- The Hon. Mrs. Lawson Johnstone.
15- Princess Batthyani-Strattmann.
16- The Chatelaine of Penshurst.
17- Lady Clementine Waring.


Full page Article called "After Dinner." By Ernest A. Bryant.


"Our Wonderful World !"
Articles with photographs on the following,-
1- Mlle. "Pavlova II." - Actres who made a Fortune from Gambling in Sables.
2- Fraulein Edith Hane. - Actress Arrested because her Dog wore Shoes of
"Revolutionary Colour.
3- Mlle. Liane De Pougy. - She is to Marry the Doctor who cured her.
4- Mlle. Lorraine. - Decked with a Pearl Necklace while Supping with a
Parisian Jeweller.
5- Mlle. Compton. - Actress who suggested a "Navy" for Girls.
6- Fraulein Asta Westergaard. - Actress who took an unexpected Balloon
Ascent.
7- Mlle. Bozena Bradsky.- Actress who holds a Diploma as a "Vet."
8- The Aristocratic Sunflowers.-Austrian Actresses claiming to be British Nobility.
9- Mlle. Gallet. - Actress who gave Whistling Solos in a New York Church.


Full page Article "The Stage From the Stalls." By E.F.S.


The Origin of the Cake-Walk ?
Full page photograph showing an American Sky-scraper Dwelling.
Photograph by Lazarnick.


A Novel in a Nutshell.
"The Ghost of a Gentleman." By Owen Oliver.


A Prima-Donna's Palace : Mme. Melba's Home.
Full page showing two half page photographs.
1- Mme. Melba's Bed-room, showing the Bed on which the Dauphin of France
Slept on his last night of Royal State.
2- The Music-room, one of the many beautiful Apartments at 30, Great
Cumberland Place, W.


Full page Article called "The Man On The Car."