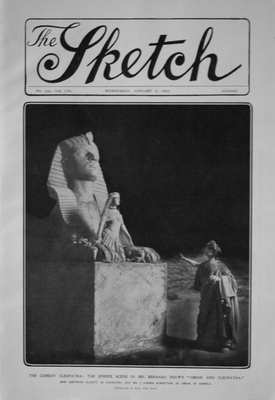 The Sketch Magazine.
This Copy has 17 pages, 34 sides, it was taken from a Bound Volume and therefore has the Binding holes showing.


The Train-Wreck in the Snow near Arbroath.
Full page showing two half page photographs of the Tay Bridge Disaster.
1- The Wrecked Carriage from which the Late Mr. Alexander W. Black, M.P. was
removed.
2- The Overturned Engine of the Express (The Driver escaped but the Fireman
was Killed.
3- Inset is a small portrait photograph of the Late Mr. Alexander Black, M.P. for
Banffshire.


Was Napoleon  III.'s  Moustache Black or Yellow.
Full page photograph of M. Burguet as Napoleon III. in "La Savelli," at the
Theatre Rejane.


Three page Article called "Small Talk of the Week."
Including photographs of the following,-
1- Mrs. Chauncy Depew.
2- The Hon. James Bryce, British Ambassador to the United States.
3- His Excellency Mr. Whitelaw Reid, American Ambassador to Great Britain.
4- Mr. Rudyard Kipling.
5- Miss Madge Nevill, on Horseback.
6- Duchess of Sutherland.
7- The Rev. The Hon. Frederick Courtnay and Miss Marguerite Silva, who are to
be Married.
8- Miss Eva Stevenson and Mr. George Washington Cable, who are Engaged
to be Married.


The Theatre Royal, Chatsworth.
Full page photgraph of the Theatre at the Duke of Devonshire's "Palace of the
Peak."


Full page Article called "After Dinner" by Ernest A. Bryant.


Veal-Fat in Place of Marble.
Full page photograph called "The Triumph of Neptune." Showing a Remarkable Sculpture in Veal-Fat and Stearin.


A Full page Article by E.F.S. called "The Stage from the Stalls."


A Bad Start For The Year !
Full page Illustration by Starr Wood.


They Traced His Little Footsteps In the Snow !
Full page Illustration by Alfred Leete.


"Antony and Cleopatra."
With Apologies to Mr. Burchel's Poster and to Mr. Tree.
Full page showing a photograph of Mr. Tree.


Novel of the Week.
"A Strange Bequest" by Zena Dare.


The Terror of the Night.
Full page photograph called "The Horror of Lonely Householders : A Masked
Burglar photographed in Business Rig."


Criminals' Warnings of Danger.
Full page of Seven photographs showing the signs of their "Freemasonry."


Full page Article called " The Man On The Car."


Pantomimes in Greater London.
1- "Babes in the Wood," at the Fulham Theatre.
2- "Cinderella," at the Broadway, New Cross.
3- "Aladdin," at the Crystal Palace.