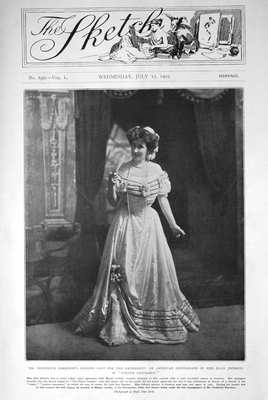 Copy has 16 pages, 32 sides, it was taken from a Bound Volume and therefore has the Binding holes showing.


France's Victory in the Motor - Derby.
Half page photograph showing Thery winning the Gordon-Bennett Cup for the Second Time.


The Wedding of one of our Wealthiest Peers.
Half page photograph showing the Marquess and Marchioness of Bute being Rowed to the Steamer "Princess Maud," on which they crossed from Irish to Scottish Waters.


The Flower - Seller.
A Full page photographic Study by W. and D. Downey.


Full page Article called "My Morning Paper," by The Man in the Train.
Together with a photograph of "Brusher" Mills, the Hermit Snake-Catcher of the New Forest, and his Hut.


"Where The Crows Gathered." At the Criterion Theatre.
Full page Illustration Drawn by Gilbert Holiday of Miss Ethel Irving, who is playing
La Villette, a Beautiful and Famous Courtesan of Paris.


Full page Article called "The Stage from The Stalls."
1- "Aylmer's Secret."
2- "The Comedy of Errors."
3- "The Axis."
4- "Where The Crow's Gathered."
Together with a photograph of Miss Ada Webster, who is playing Lady Marjorie Royal in "The Axis," at the Criterion.


"A Brother Who Succeeds a Brother and a Sister Who Succeeds a Sister."
Full page of photographs showing Miss Phyllis Dare, Sister of Miss Zena Dare, and Mr. Stanley Brett, Brother of Mr. Seymour Hicks, in "The Catch of the Season," at the Vaudeville Theatre.


A Result of the "Stone-In-The-Bath-Bun" Appeal.
Full page Illustration Drawn by Charles Crombie.


Some Ball-Room Types : Partners We Have All Met.
Full page Illustration Drawn by Dudley Hardy,called "The Would Be Funny Man."


Full page Article called "The Literary Lounger."
Together with an Illustration Drawn by G.L.Stampa, called "A Matter Of Personal Opinion."


Jack Practices French For The Benefit of Jaques
Full page of Illustrations by Rossi Ashton, where he is Imagining Preliminaries to the Visit of the British Fleet to Brest.


A Novel in a Nutshell.
Two Full page Novel called "The Widow And The Boy." written by Emeric Hulme Beaman.


Full page Article called "Key Notes," by Common Chord.
Together with Two photographs showing,-
1- The Revival of Thomas Campion's "The Masque of the Golden Tree," at the
Guildhall School of Music.
2- Signor Pini Corsi and Miss Nielson in "Don Pasquale," at the Waldorf Theatre.


Full page Article called "The Man on the Car."
1- The Tourist in France.
2- The Hyde Park Roads.
3- The Automobile Club of France and the Gordon-Bennett Race.
4- The Examination of Cars.
5- The Motor at Election-Time.
6- The Result of the Gordon-Bennett.
Together with Two photographs showing,-
1- A Penny Motor-Boat : The "Battersea" on the Lake, Battersea Park.
2- A Motor-Plough at work in the Vineyards.


Small Photograph of the Challenge Cup presented by Mrs. Oakley to the County of Sussex Rifle Association.