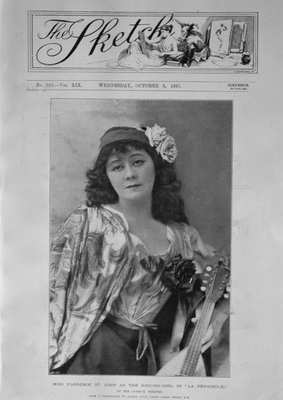 Copy has 26 pages, 52 sides, it has been taken from a Bound Volume and therefore has the Binding holes showing.

Front page shows a portrait photograph of Miss Florence St. John as the Singing-Girl in "La Perichole," at he Garrick Theatre.


Our Critic and Mr. Christie Murray.
Half page Letter to the Editor of "The Sketch,' by the Critic in Reply to Mr. Murray.


Photograph of Miss May Marton, now Appearing in "The Mermaids," at the Avenue Theatre.


Full page photograph of Miss Florence St. John in Her Bridal Dress in "La Perichole," at the Garrick Theatre.


Article called "All For a Halfpenny."
Together with a small portrait photograph of Mr. Charles H. Grinling, Editor of the "News of the Week."


Six page Article called "Small Talk."
Together with the Following photographs,-
1- Oak Planted at Killarney by The Queen.
2- The Summit of the Chilkoot Pass, on the Road to Klondyke.
3- The Cavalry Depot Staff, Canterbury.
4- The Findhorn Viaduct.
5- The "Haka" of the Maoris.
6- Gilpin's Cottage.


Full page, showing Two Half page photographs of the Fire that took place in the Buckingham Village of Ravenstone.
1- Where the Fire originated.
2- A sample of what the Fire did.


Article called "The Queen's Watermen." together with Half page photograph.


Common Objects of The Strand.
Half page Article called "The Man in the Tent" by Barry Pain.


Article about the curious Clock at Sir John Pennett's in Cheapside called, "The Romance of a Cheapside Clock."


Miss Helen Gladstone.
Article on the Cycling habits of Miss Gladstone, together with a photograph.


Miss Barrie's Babbie On The Stage.
Article with a Half page portrait photograph on Miss Maude Adams, who has been Appearing as "Babbie" in "The Little Minister," in New York.


Full page photograph showing Mr. Frederick Harrison as the Comte de Candale in "A Marriage of Convenience," at the Haymarket Theatre.


The Light Side of Nature.
Full page Illustration Drawn by Raven Hill.


Things I Have Not Seen : The Maelstrom.
Full page Illustration Drawn by Leslie Willson.


An Aerial Railway.
Half page Article on the Invention by Mr. H.S. Halford, London.
Together with a photograph.


Article on "The American Art Association."


Half page Advert for "Mappin & Webb's."


Half page Advert for "Vinolia."


Full page Article on "Theatrical Gossip," showing the Following  photographs,-
1- The Actress Miss Lettice Fairfax, Irene in "One Summer's Day, at the Comedy
Theatre.
2- The Actress Adie Burt, who is the Pretty Young Wife in "The Purser," at the
Strand Theatre.


Article called "The Antiquities of Ireland."


Half page Article called "The Angler's October," by F.G. Walters.


Half page Advert for "Wilson & Gill."


Half Page Advert for "Guy's Tonic."


Full page Advert for the Issue of Debenture for "The Dee Estates, Limited."