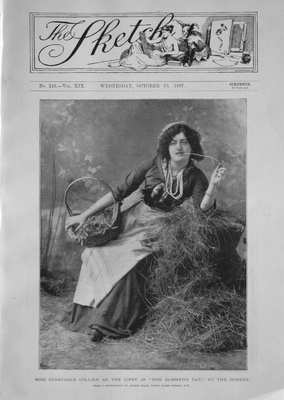 This Copy has 26 pages, 52 sides, it was taken from a Bound Volume and therefore has the Binding holes showing.

Front page shows a photograph of Miss Constance Collier as the Gypsy in "One Summer's Day," at the Comedy Theatre.


The Genius of Sir John Gilbert.
Double page Article on Sir John Gilbert with the following photographs of his Work.
1- The Queen and the Prince of Wales. - Drawn by Sir John to commemorate
Her Majesty's 23rd Birthday.
2- Henry the Seventh keeping Christmas in Westminster Hall.
3- After the Battle.


"The Liars," At the Criterion Theatre.
Full page showing the following two half page photographs,-
1- The Tattons' Bungalow : The End of the First Act.
2- The Tattons' Town House, where the Women attempt to Deceive Lady
Jessica's (Miss Moore) Brother-in-Law.


Full page photograph of Miss Olitzka as Elsa in "Lohengrin," at Covent Garden.


Full page Article called " A Curious Picture and an Old Play-Bill."
Showing two pictures from the Drama section of the Victorian Era Exhibition at Earl's Court.
1- A Play-Bill for Lord Byron's Poem "Manfred."
2- An original Patchwork Picture, by John Parry.


The Braille School for the Blind.
Article together with the Following  photographs,-
1- A Blind person Feeling his way around a Globe.
2- The Blind Making Baskets.
3- A Blind Children's Zoo.


The Book and its Story.
Mr. Edward Clodd's  Book Review for  "The Book of Dreams and Ghosts," Written by Mr. Andrew Lang.


The Art of the Day.
Full page Article showing a Bust of the Queen's Mother, The Duchess of Kent.


A Stage Gypsy.
Article concerning Miss Constance Collier who Plays the Role of a  Gypsy  called "Chiara" in "One Summer's Day," at the Comedy Theatre.


Half page Article for "Verdi's Birthday."


The Centenary of Haynes Bayly.
Half page Article on Thomas Haynes Bayly, together with his photograph.


A Novel in a Nutshell.
Chapter 1 of a Novel called "That Good May Come," by Clara Savile-Clarke.


Half page Advert for "Mappin & Webb's."


Full page Advert for The "Charles A. Vogeler Co."


Article on "The Liars," at the Criterion Theatre.


Half page Article "The Literary Lounger."


Full page Article called "The World of Sport."
1- Football : with a photograph of the Footballer Ben Davies.
2- Racing Notes by Captain Coe.
3- Hunting.


Half page Advert for " The International Fur Store."