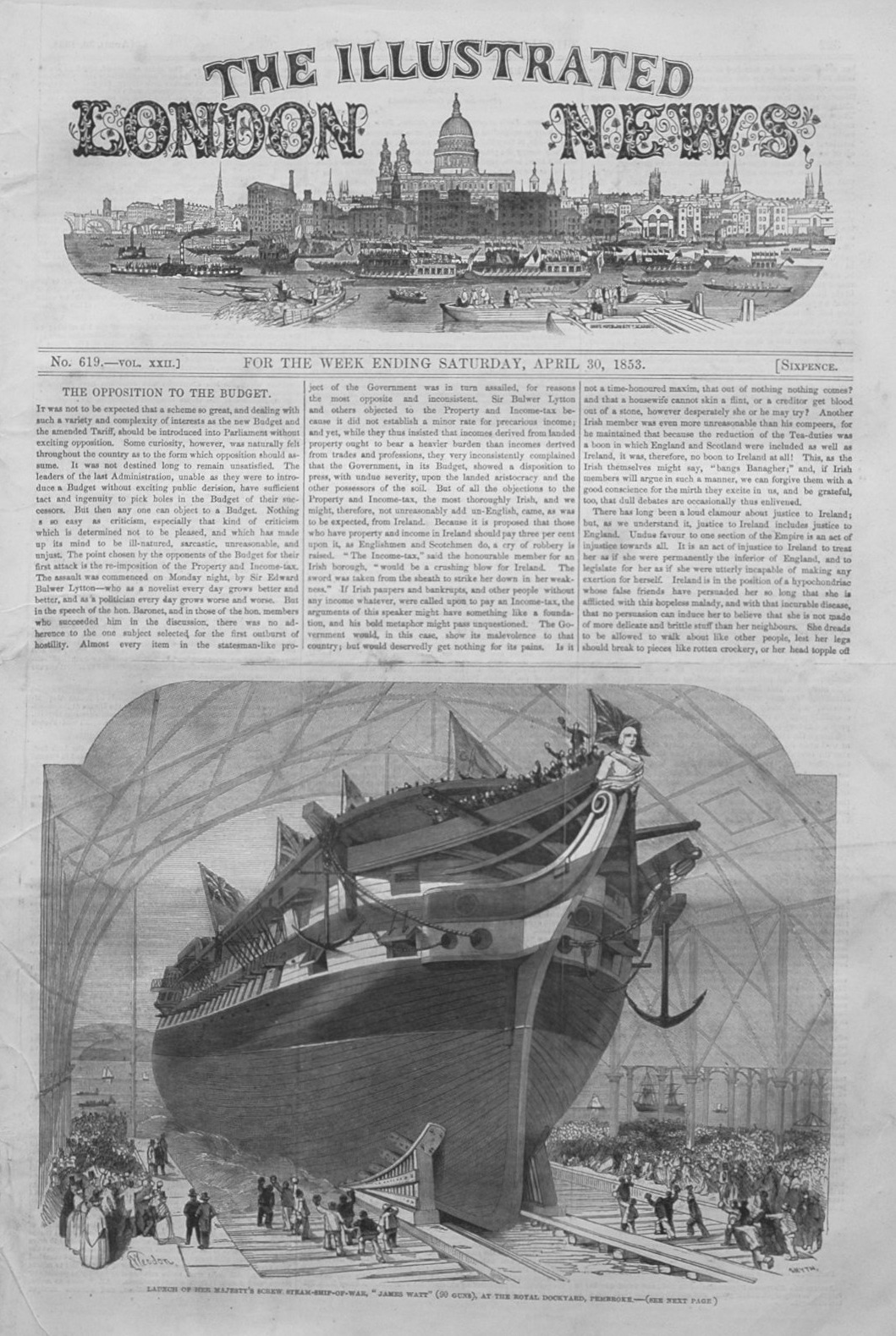 For Sale is the Illustrated London News for April 30th 1853. Edition No. 619.
This Issue has 8 Pages, 16 Sides, it was taken from a Bound Volume and therefore has the Binding Holes showing. Condition of the Text and the Engravings is Bright and Clear, with Age related Foxing Spots appearing on some of the Pages. Overall this Issue is in Good Condition.

1- Front page has the Article "The Opposition to the Budget."
2- Launch of H.M.S. "James Watt." With Half Page Engraving.
3- Foreign and Colonial News.
4- National Sports, : Newmarket First Spring Meeting.
5- New Railways.
6- Epitome of News.- Foreign and Domestic.
7- Recall of Santa Anna to Mexico.
8- Downham Ram. With Engraving.
9- Portable Iron Church for the Diocese of Melbourne, South Australia. With
Small Engraving.
10- A Voyage to Valparaiso.
11- Redcliffe Infant School, Bristol. With Engraving.
12- The Art-Union of London.
13- Nooks and Corners of Old England. (Ruins at Crowhurst, Sussex.)
14- The Court.
15- Fashionable Entertainments.
16- Metropolitan News.
17- Provincial Intelligence.
18- Law and Police Intelligence.
19- Poem : "The THorns of May." By Mrs. T.K. Hervey.
20- The Theatres. - Royal Italian Opera, Lyceum, Olympic, St. James, Strand,
Haymarket.
21 Half Page Engraving called "The First of May." Painted for Her Majesty, By
Winterhalter.
22- The Latest Excavations at Pompeii. With Engravings.
23- Half an Hour at the Exhibition of the Royal Academy.
24- Imperial Parliament.
25- Chess,: with Problem No. 483.
26- St Mark's Church, Albert-Road, Regent's-Park. With Engraving.
27- Naval Intelligence.
28- Destruction of a Large Mill at Halifax. With Engraving.
29- Parliamentary Portraits, : Viscount Goderich, M.P. for Huddersfield.
30- Exhibition of the Society for Painters in Water-Colours.
31- Engraving of "The Shepherd." Painted by Walter Goodall.
32- Engraving called "Moonrise." Painted by E. Duncan.
33- Monetary Transactions of the Week.
34- The Markets.
35- Bankrupts, Births, Deaths, Marriages.
36- Banquet in Honour of Mrs. H. B. Stowe.
37- Paris Fashions for May. With Illustrations.