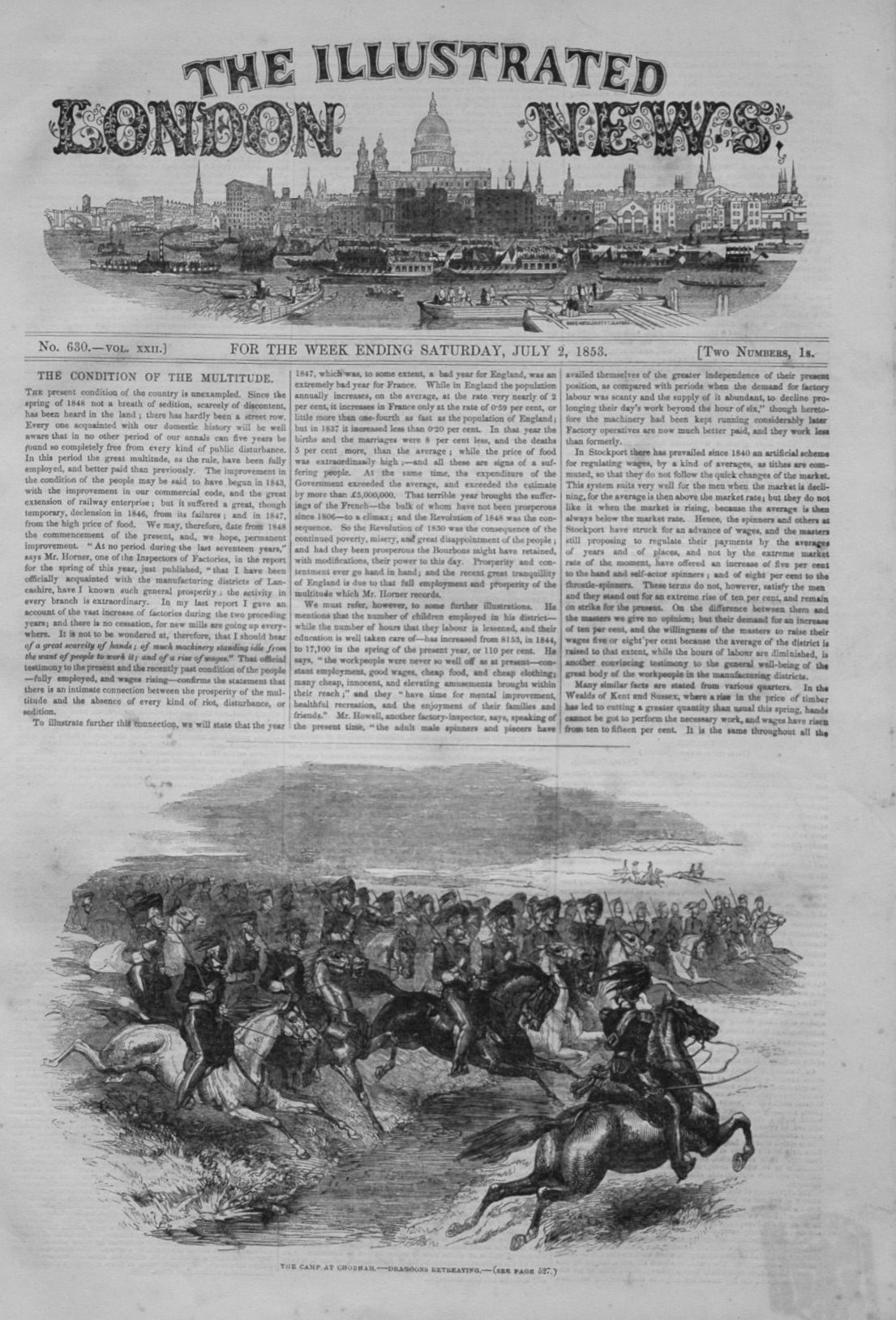 For Sale is the Illustrated London News for July 2nd. 1853. Edition No 630.
This Issue has 8 Pages, 16 Sides, it has been taken from a Bound Volume and therefore has the Binding Holes showing.
Condition of the Text and the Engravings is lovely and Clear. Foxing Spots relating to Age do appear throughout. Spine has been Strengthened with Filmoplast Tape.

1- Front page Article called "The Condition of the Multitude". - (Comments on
the State of the country.)
2- Foreign and Colonial News. - France, Russia and Turkey.- Occupation of the
Danubian Principalities. Russia, Denmark, Hanover, America, India, China,
and Australia.
3- Imperial Parliament. - (Business in House of Commons, and House of Lords.)
4- The Search for Sir John Franklin.
5- Launch of the Steam-Ship "Croesus," at Blackwall. With Engraving.
6- Destruction of the Imperial Theatre, Moscow, By Fire. With Engraving.
7- The Court.
8- The Royal Christening. (Christening of the Infant Son of her Majesty and His
Royal Highness Prince Albert.)
9- Summary of the new Cab Law.
10- National Sports - Newcastle Races, and Ludlow Races.
11- Naval and Military Intelligence.
12- Double page Engraving showing "The Camp at Chobham. - Troops Passing
in Review Before Her Majesty."
13- Philharmonic Society.
14- The Theatres,- Royal Italian Opera, St. James's, Olympic.
15- Table-Turning. (Letter Addressed to the Editor of the "Times" by Professor
Faraday.)
16- Metropolitan News.
17- Chess, - With Problem No. 491.
18- Epitome of News. - Foreign and Domestic.
19- Engraving called "Affection." Painted by J. Jenkins. - Exhibition of the
Society of Painters in Water-Colours.
20- Engraving called "Yoke of Draught Oxen, on the Moselle." Painted By
G. Cole. - Exhibition of the Royal Academy.
21- "The Maid of Saragossa." By the Sculptor J.Bell.
22- The Architectural Museum, Canon-Bow, Westminster. With Engraving.
23- Engraving showing a Mahogany and or Moulu Cabinet, the Property of Her
Majesty, in the Gore-House Exhibition.
24- Provincial Intelligence.
25- The Markets.
26- Monetary Transactions of the Week.
27- Bankrupts. Births. Deaths. Marriages.
28- The Excavations at Cuma. With Engravings.