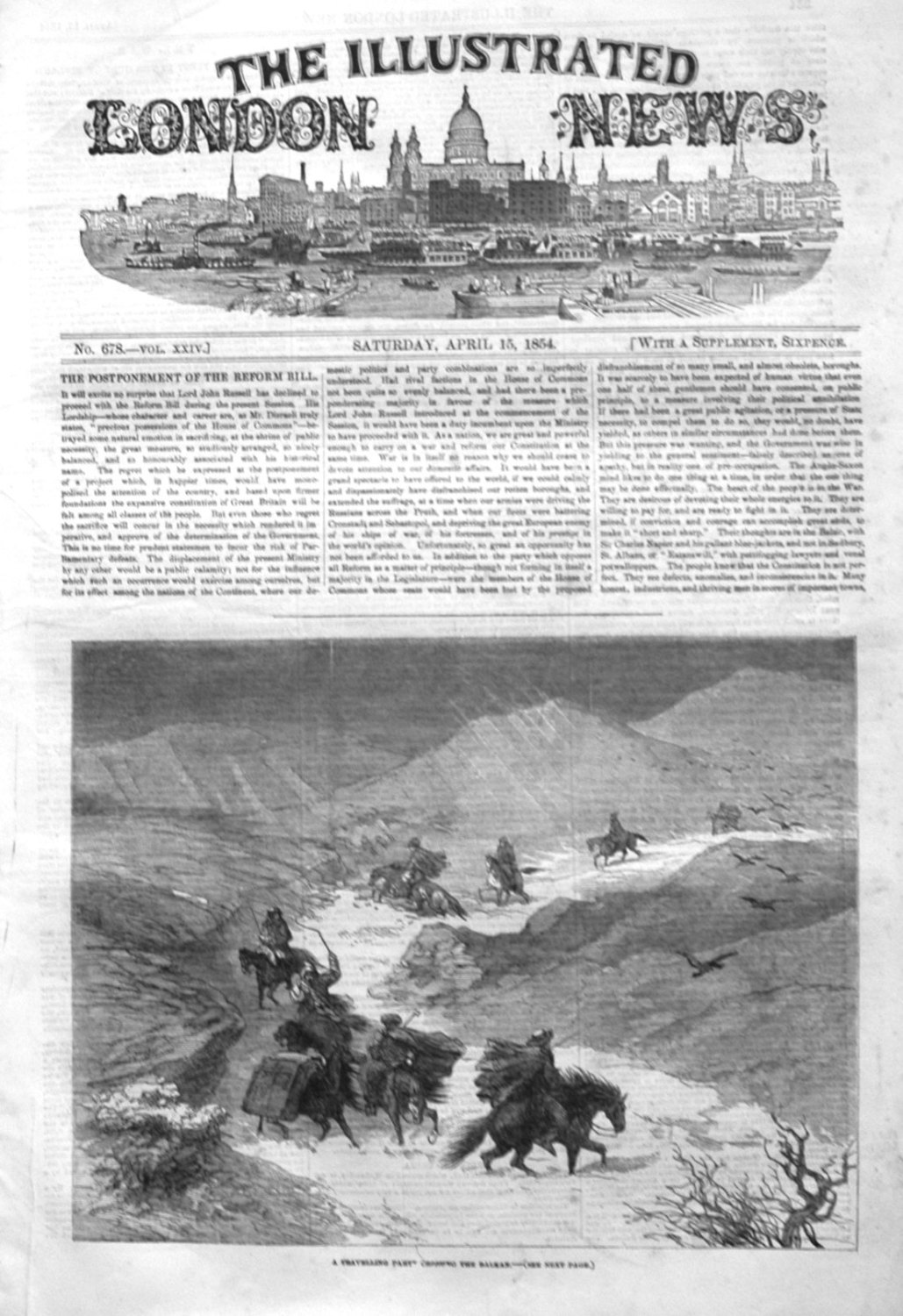 For Sale is the Illustrated London News April 15th 1854. Edition No. 678.
This Issue contains 8 Pages, 16 Sides, it has been taken from a Bound Volume therefore the Binding holes are Showing.

Condition of the Text and Enhgraving is Lovely and Clear. Foxing is Beginning to show one of two  Pages. Overall condition is Good.

5- The War.
a- The Baltic Fleet in the Gulf of Finland.
b- The Fleets in the Black Sea.
c- The new Protocol.- The Prussian Policy.
d- Defeat of the Russians.
e- Departure of Prince Napoleon.
f- A Circassian Victory.
g- Cowardly Assault on English Merchantmen.
h- The Allied Troops at Malta.
i- Presentation of the City Address.
j- The French, Englisg, and Turkish Treaty.
k- Cruising for Russians in the Channel.
6- Attempted Insurrection in Sardinia.
7- Epitome of News - Foreign and Domestic.
8- Marshal De Saint Arnaud, Commander-in-Chief of the French Expedition to
the East. Together with His Portrait Engraving.
9- The Declaration of War in the French Senate. With Engraving.
10- Departure of Lord Raglan and the Duke of Cambridge.
11- Engraving showing "The Departure of Lord Raglan and H.R.H. the Duke of
Cambridge for the East."
12- Mrs. Chisholm's Departure for Australia.
13- Half Page Engraving showing "The Departure of Mrs. Chisholm, in "The
Ballarat," For Australia.
14- Church, Universities, &c.
15- The Court.
16- Town and Table Talk, on Literature, Art, &c.
17- Music.
18- The Theatres,- Marylebone. Non-Theatrical Exhibitions at Theatres. Gallery
of Illustration.
19- National Sports. - Harrow Second Spring Meeting.
20- Easter in Russia.
21- Half page Engraving showing "Easter Festival in St. Petersburg.- Presentation
of the Egg."
22- Half Page Engraving showing "Palm Sunday in St. Petersburg."
23- The Lighthouse of Hango-Udd
24- Engraving showing "The Lighthouse of Hango-Udd on the Southernmost
Point of Finland."
25- Engraving showing the "Town and Fortess of Arta, in Albania."
26- The Greek Insurrection.
27- Obituary of Eminent Persons,-
a- Lieut.-General Sir Charles Wade Thornton, G.C.H.
b- Viscountess Gort.
c- James Wemyss, Esq., of Wemyss Castle. - Rear-Admiral.
28- Imperial Parliament.
29- Chess,- with Problem No. 530.
30- Monetary Transactions of the Week.
31- The Markets.
32- Bankrupts. Births. Deaths. Marriages.
33- Mallee Birds, in the Zoological Society's Gardens, Regent's-Park. With
Engraving.
34- The British Museum. - The Great Egyptian Gallery.
35- Half Page Engraving showing "The Great Egyptian Gallery, in the British
Museum.
36- Engraving showing "Medieval Plates, in the British Museum."
37- Progress of the Crystal Palace. Together with 2 Half page Engravings,-
a- Commencement of the Crystal Palace, at Sydenham.
b- The Egyptian Court in Progress.
38- Metropolitan News.
39- H.M.S. "Miranda," off Revel.
40- Engraving of "The Miranda" in the Ice off Nargen Island, Gulf of Finland."
41- The Baltic Fleet.
42- Full page Engraving showing "The Baltic Fleet Preparing to Anchor at the
Entrance of the Great Belt. From a Sketch by O.W. Brierly.