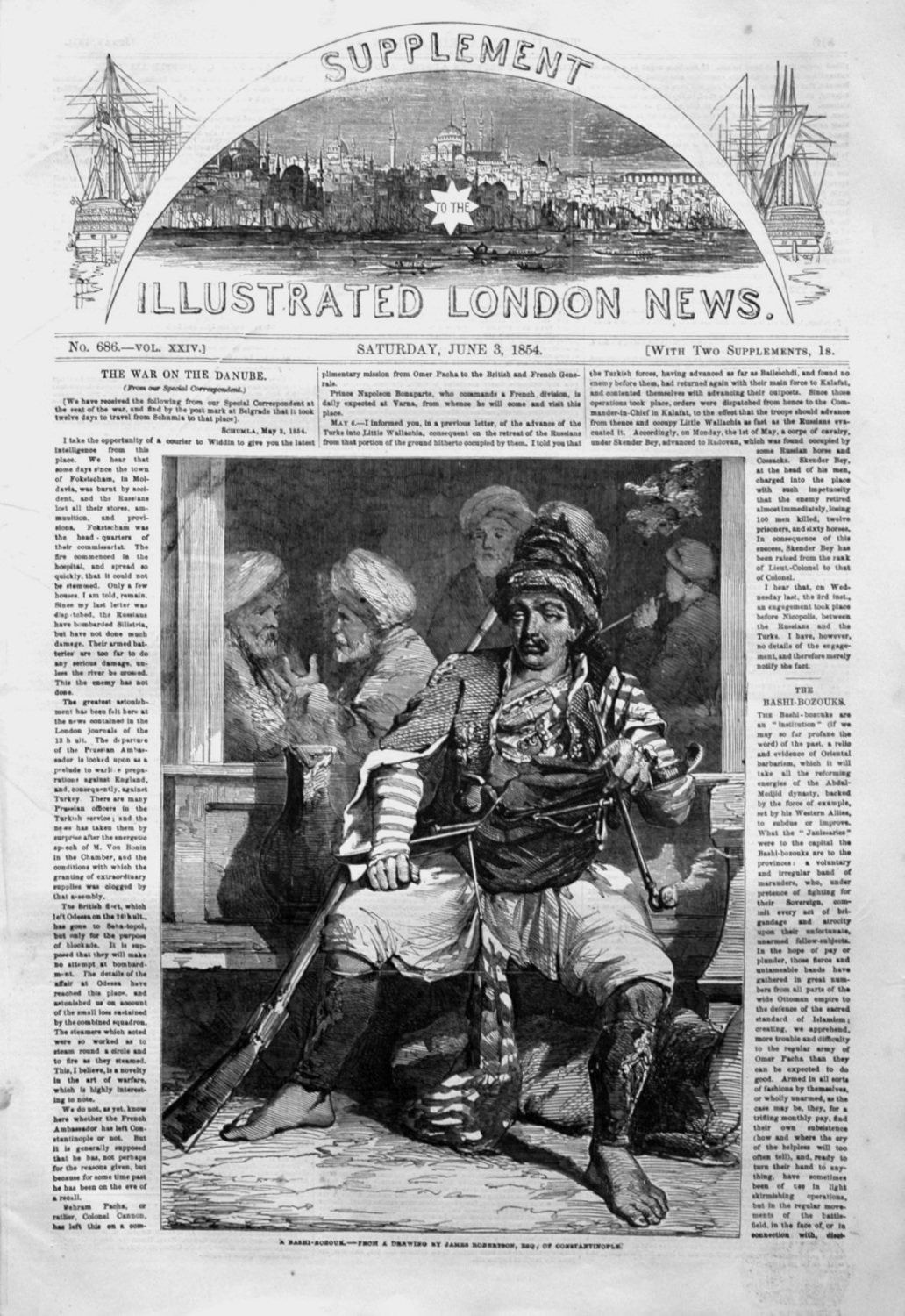 For Sale is a Supplement to the Illustrated London News for June 3rd 1854.
Edition No. 686. This Issue contains 12 Pages, 24 Sides, it was taken from a Bound Volume,therefore the Binding Holes are showing.

Condition.- Pages in this Issue have Foxing, which is quite Bad in places, Particularly on the Map of Caucasus. This Copy is suitable for information purposes only. Red London News Stamp on inside page. Spine has been Strengthened with Filmoplast Tape.

1- Front page Article "The War on the Danube."
2- The Bashi - Bozouks.
3- Engraving showing "A Bashi-Bozouk.- From a Drawing by James Robertson,
Esq. of Constantinople."
4- The Treaty between England, France, and Turkey.
5- The Treaty between Austria and Prussia.
6- The New Quadruple Alliance.
7- The Government, Administration, and Internal Condition of the Russian
Empire. a- The Police.
b- The Czar.
c- The Administration,- The Functionaries of the Government.
d- The Law and the Magistracy.
e- The Nobility.
f- The Government,&c, of the Russian Empire.
g- The Serfs.
h- The Army.
i- The Navy.
j- The Clergy.
k- The Mestchane; or, Middle-Class.
l- The Knout.
8- Cronstadt.
9- Engraving showing "Peter The Great, at Cronstadt."
10- Engraving showing the "Cathedral Church of the Saviour, and the
Observatory, at Cronstadt."
11- Engraving showing "Cronstadt, - The Harbour."
12- Loss of H.M.S. "Tiger."
13- Engraving showing "H.M.S. "Tiger."
14- The Baltic Fleet in Elgsnabben Bay.
15- Engraving showing "The Atlantic Fleet at Anchor, in Elgsnabben Bay."
16- Sebastopol and its Fortifications.
17- Large Engraving showing "Sebastopol, and its Fortifications, on the Black
Sea. Copied, by Permission of the Admiralty, from the Sketch taken by
Lieutenant Montagu O'Reilly, on Board H.M.S. "Retribution."
18- Memorials of Sinope.
19- Epitome of News- Foreign and Domestic.
20- Chess,- with Problem No. 536.
21- The Supply of Musketry and Small-Arms for the British Army.
22- Landing of the Royal Horse Artillery in the Bosphorus.
23- The Bombardment of Odessa.
24- Full page Engraving showing "First Landing of the Royal Horse Artillery in the
Bosphorus."
25- Full page Engraving showing "The Bombardment of Odessa.- From a
Drawing by W. Knell."
26- The Caucasus and the Seat of War in Asia.
27- Full Page Map showing the Caucasus and the Seat in War in Asia.
28- The Circassians
29- Literary Miscellanies.- "A Plea for the Donkey."
30- Poetry. - "Pauvre Petite Catarina, (The Little Wandering Singer.) By Grace
Greenwood."
31- Truths fron Farmers.
32- The Soldier's Pay and Pension.
33- The Royal Regiment of Artillery.
34- Double page Engraving showing "The Royal Regiment of Artillery."
35- Literature.-
a- "History of the French Protestant Refugees, from the Revocation of the
Edict of Nantes to the present Time." By Charles Weiss.
b- "Voltaire and His Times." By L.F. Bungener.
c- "Evenings in my Tent." By Rev. N. Davis.
36- Education Census.