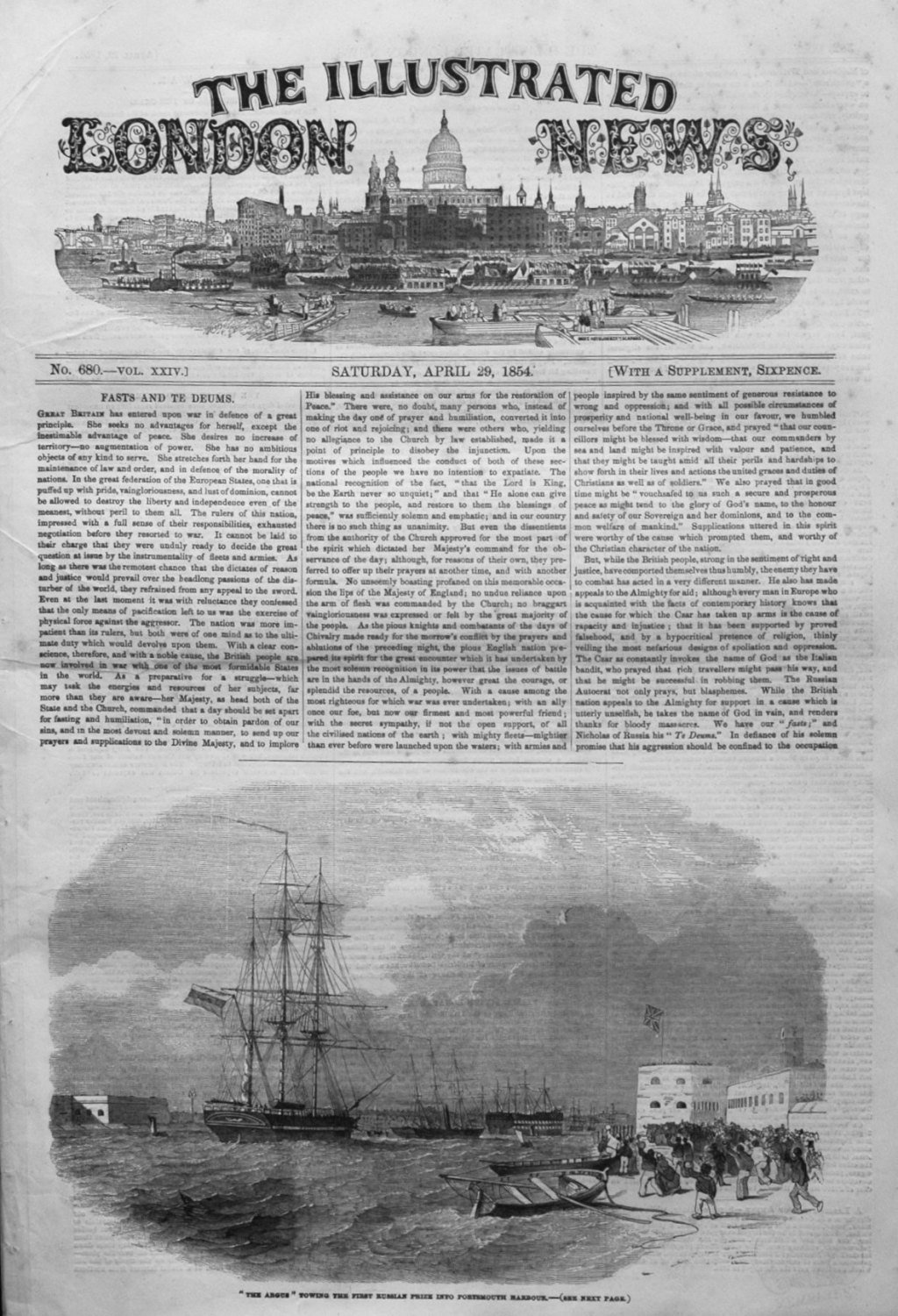 For Sale is the Illustrated London News April 29th 1854. Edition No. 680.
Issue Contains 8 Pages, 16 Sides, it has been Taken from a Bound Volume therefore the Binding Holes are Showing.

Condition of the Text is Clear and Bright. Age related Foxing Spots appear
on some pages. Condition overall is Good to Fair. Spine has been Strengthened with Filmoplast Tape. Red London News Stamp on page inside.

1- Front page Article "Fasts and Te Deums."
2- The First Russian Prizes.
3- Engraving showing "The Argus" Towing the First Russian Prize into Portsmouth
Harbour.
4- Foreign and Colonial News. France. Prince Lucien Bonaparte.
5- The War.- a- Difficulties of the Czar.
b- The War on the Danube.
c- The Fleets in the Black Sea.
d- The Allied Troops at Gallipoli.
e- The Russo-Greek Insurrection.
f- The French Baltic Fleet.
g- Preparations for the War.
h- Departure of Lord Raglan from Marseilles.
i- Sir Charles Napier in the Baltic.
j- Melancholy Accident in the Baltic.
k- Important Convention between England and America.
l- The Spanish and American Quarrel.
m- The Overland Mail.
6- The Court.
7- The Emperor of Austria's Nuptials.
8- Ball at the Jardin D'Hiver, at Paris.
9- Half Page Engraving showing the "Ball at the Jardin D'Hiver, at Paris, in Aid of
the English Charitable Fund."
10- The Ball at the Elysee.
11- Engraving showing the "Fete given by the Emperor to Lord Raglan, The
Duke of Cambridge, and Suites, in the Garden of the Elysee, at Paris."
12- Bridging Experiment Near Paris.
13- Embarkation of French Troops at Toulon. With Engraving.
14- Church, Universities, &c.
15- The War on the Danube.
16- Sveaborg. with- (Map showing The Gulf of Finland).
17- Further Discoveries at Cuma and Canosa.
18- Engraving showing "Remains of a Roman Building, at Cuma."
19- "The Dragon Well" at Walthamstow.
20- Exhibition of the Society of Painters in Water-Colours. With the Following
Engraving,- "Hudibras and Ralpho in the Stocks."  Painted by John Gilbert.
21- New Church in the Punjaub. With Engraving.
22- Imperial Parliament.
23- Obituary of Eminent Persons.
a- William Acton, Esq. Late M.P. of West Aston, Co. Wicklow.
b- John Davies Gilbert, Esq. of Trelissick, Cornwall, and Eastbourne,
Sussex.
24- Depression of the Flax Trade.
25- Metropolitan News.
26- Town and Table Talk on Literature, Art &c.
27- Chess, - with Problem No. 532.
28- Subscriptions for Soldiers Wives.
29- Chevalier Bunsen.
30- A Cruise in the Black Sea.
31- Engraving showing "Port Golovin, on the Black Sea, Abandoned by the
Russians, and Burny by the Circassians."
32- Royal Italian Opera.
33- Engraving showing the "Scene from "Matilde Di Shabran," at the Royal
Italian Opera.
34- Haymarket Theatre.
35- Engraving showing a Scene from the Haymarket Theatre " Mr. Buckstone's
Voyage Round the Globe (Leicester Square)."
36- Sadler's Wells Theatre.
37- Surrey Theatre.
38- Music.
39- National Sports.
40- The Markets.
41- Monetary Transactions of the Week.
42- Bankrupts. Births. Deaths. Marriages.
43- Paris Fashions for May.
44- Engraving showing "Children's Dresses for May.- The Goat-Chaise in the
Champs Elysees."