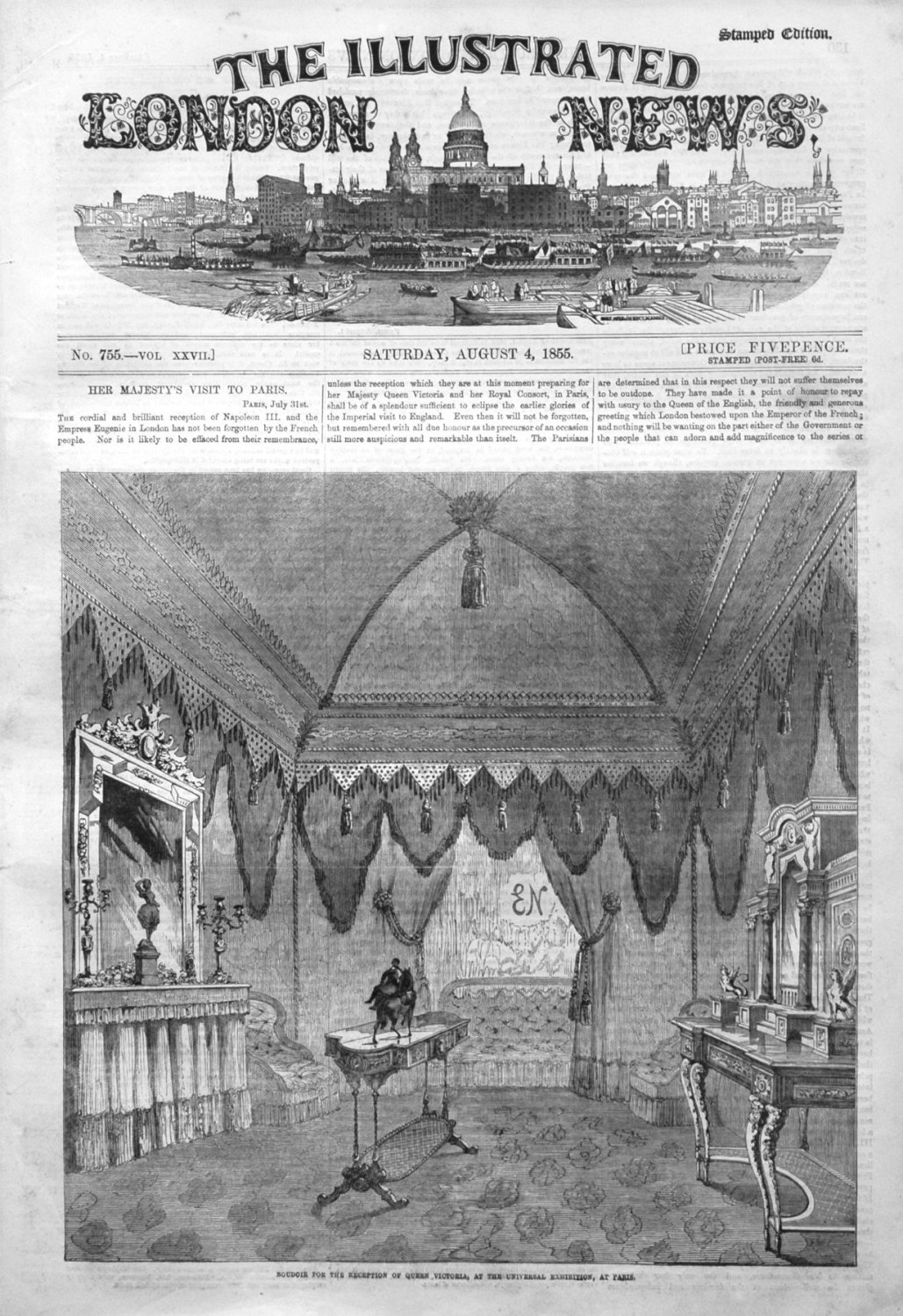 For Sale is the Illustrated London News with a Supplement for August 4th 1855.
This Issue contains 8 Pages, 16 Sides, the Supplement also containing 8 Pages, 16 Sides. They have been taken from a Bound Volume, therefore the Binding Holes are showing.

Condition of both shows the Text and the Engravings to be Clear. Pages are Tanned, with Light Foxing throughout. Red London News Stamp on inside Page
Spine has been Strengthened with Filmoplast Tape on Both. Goodwood Plate
Engravings slightly Faded.

1- Full page showing 7 Engravings  "Champagne Bottling, at Pierry, in France."
2- Something About Champagne.
3- The War in the Crimea. - a- The Sortie on the 15th July.
b- Despatches from General Simpson.
c- Despatch from the Baltic.
d- General Pelissier on the Progress of the Siege.
4- Full page Engraving showing " Burial at Sea.- Sketched by J.W. Carmichael."
5- Reconnaissance of the Strait of Stralsund.
6- Engraving showing "The Gun-Boat "Ruby," and Boats of "The Arrogant" and
"Magicienne" Reconnoitring the Strait of Stralsund."
7- Burial at Sea.- A Sketch in the Baltic.
8- Engraving showing "The Caesar."- "Hands Piping to Bathe."
9- Piping all Hands to Bathe.
10- Lubbock's Reconnoitring Reflector.
11- The Public Health. No. 1.
12- Naval and Military Intelligence.
13- Imperial Parliament.
14- Double Page Oval Engraving showing "The Wellington College, near
Sandhurst. South Front.- John Shaw, Architect."
15- Full page showing "The General Plan of the Wellington College."
16- The Wellington College.
17- Chess,- with Problem No. 598.
18- Town and Table Talk on Literature, Art. &c.
19- Laying Down Position Lights for Menof War.
20- Engraving showing "Preparing to make Signals."
21- New Ambulance Transport. With Engraving.
22- Sketches in the Crimea.
a- Half page Engraving "The Woronzow Road."
b- Half page Engraving showing "Turkish Batteries Commanding
the Woronzow Road."
23- Our Lodgers. (No.II.) - The Back Attic.
24- The Theatres,- Princess'.  Haymarket.  St. James's.
25- Rachel.
26- Music. -  New Musical Publications.
27- Notes of the Week.
28- Epitome of News - Foreign and Domestic.