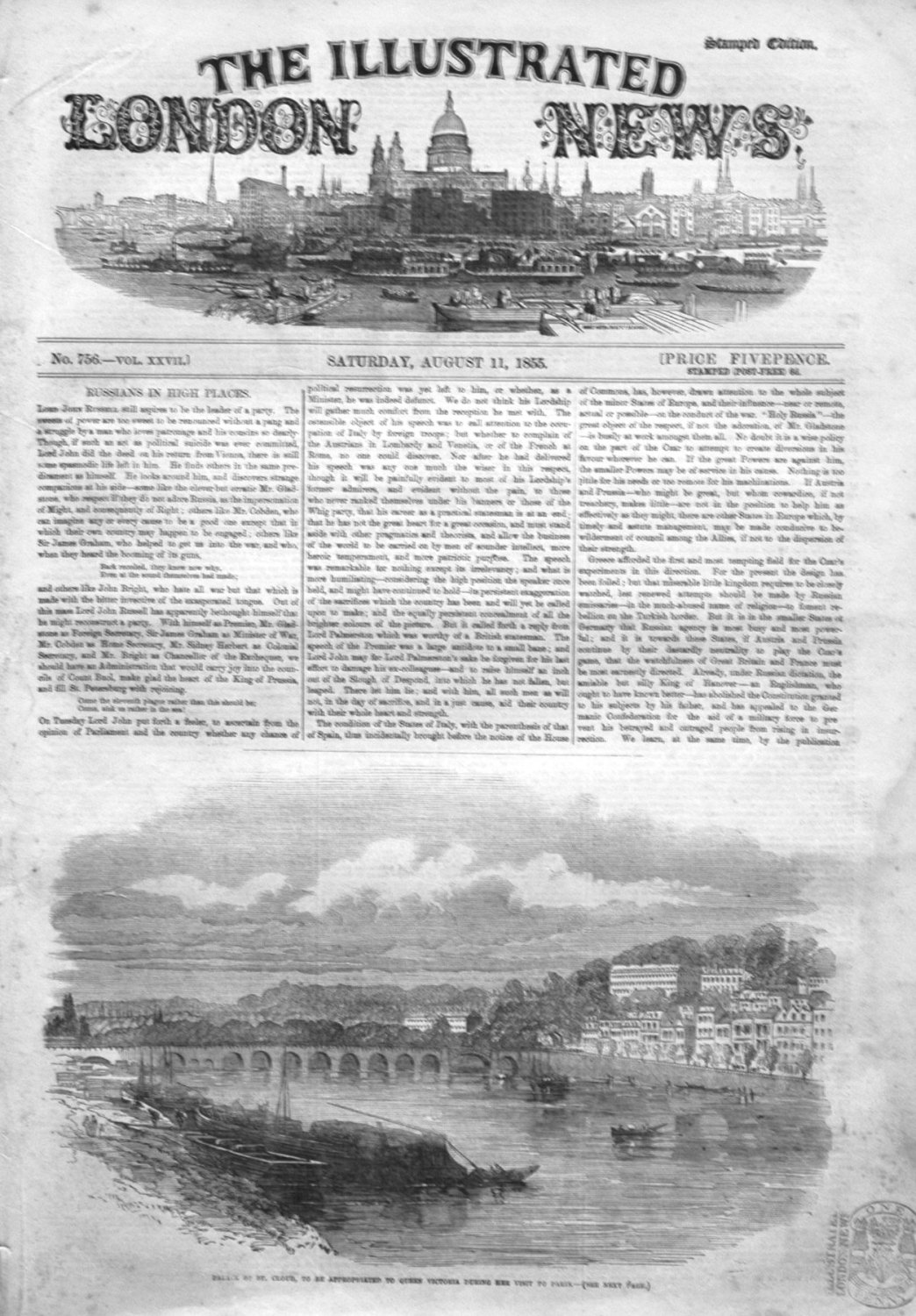 For Sale is the Illustrated London News with Supplement for August 11th 1855.
This Issue Contains 8 Pages, 16 Sides, Supplement also containing 8 Pages,
16 Sides. taken from a Bound Volume, therefore the Binding Holes are showing.

Condition of the Text is Clear, so is the Engravings. However, the pages are very Tanned , with the Right Margin showing a Stain. Not much Foxing is present, the Supplement being free from it. Red London News Stamp on Front Page.

1- Front page Article "Russians in High Places."
2- The Palace of St. Cloud.- The Residence of Her Majesty during Her
Approaching visit to Paris.
3- Newspapers to the Colonies. -(Letter to the Editor)
4- A Coach Robbery in Spain.
5- Foreign and Colonial News.
a- France.
b- The Constitutional Struggle in Hanover.
c- Spain and the Western Alliance.
d- Austrian Advances to the Western Powers.
e- The Sound Dues and the United States.
f- America.
g- The Hango Massacre.
6- The Boats of the "Arrogant" and "Magicienne" off Wyborg.
7- Half page Engraving showing "Boats Reconnoitring the Passage to Wyborg."
8- Half page Engraving showing "Fire Over Cronstadt, seen from the
Quarter-Deck of "The Caesar."
9- Raft in the Sea of Azoff.
10- Engraving showing "Lady Nancy" Raft attacking Taganrog, in the Sea of
Azoff.
11- The Artillery Taking Lancaster Guns down to the First Parallel by night. With
Engraving.
12- The Queen's visit to Paris.
13- The Siege of Sebastopol.
14- Poland and Polish Legion.
15- Launch of the "Marlborough."
16- Full page Engraving showing "The Marlborough" immediately after the
Launch, at Portsmouth.
17- Full page showing 2 Half Page Engravings.
a- The Palace of Industry at Paris.- Eastern Entrance, and Statue
of the Emperor of the French.
b- The Palace of Industry at Paris. -The Indian Court.
18- Paris Exhibition.
19- The Court.
20- Obituary of Eminent Persons.-
a- The Earl of Sefton.
b- The Chevalier De Colquhoun.
21- Church, Universities, &c.
22- Imperial Parliament.
23- Metropolitan News.
24- Town and Table Talk on Literature, Art, &c.
25- National Sports.
26- Costume of the Season.
27- Launch of "La Hogue," the Largest Ship ever Built at Sunderland. With
Engraving.
28- Launch of a Steamer by Torchlight.
29- Engraving showing "Torchlight Launch of the Iron Screw-Steamer "Azoff,"
in the Clyde."
30- Arthur H. Hassall, M.D., F.L.S., Esq. With his Portrait Engraving
31- Meyerbeer. With his Portrait Engraving.
32- The French Loan.
33- Half Page Engraving showing "The French Loan.- Scene at the Hotel of the
Minister of France, Rue De Rivoli, Paris."
34- Monetary Transactions of the Week.
35- The Markets.
36- Bankrupts. Deaths. Births. Marriages.
37- The Late Disturbances and Calamitous Loss of Life in West Africa.
38- Gold Medal presented to Captain Cadell. With Engravings.

1- Sketches in the Siam. With the Following Engravings.
a- Siamese Floating House, on the River Menam.
b- Siamese White Elephant.
c- Siamese State Barge.
d- Barge of the King of Spain.
e- Siamese Writing.
2- The Theatres,- St. James's.  Drury-Lane.  Sadler's Wells.
3- The War in the Crimea.
4- Despatches from General Simpson.
5- Despatches from Admiral Dundas.
6- Naval and Military Intelligence.
7- Notes of the Week.
8- Grand Field Day of the Rifle Corps at Torquay. With Engraving.
9- Launch of the "Araxes."
10- Engraving showing the Launch of " The Araxes." at Bristol.
11- Meeting of the Royal Agricultural Society of England, at Carlisle.
12- Engraving showing "The Court-Houses, Carlisle, and Triumphal Arch."
13- Engraving showing "Meeting of the Royal Agricultural Society of England,
at Carlisle. - General View."
14- Imperial Parliament.
15- Country News.
16- The Book-Buyer. No. 1.
17- Popular Amusements of Paris. - Article with the Following Engravings.-
a- Exterior of a Cheap Wine Shop.
b- Shooting at Plaster Casts.
c- Skittles at the Barrier.
d- Ball at the Barrier.
e- Parisian Bowling-Alley.
f- The Ordeal of the Blind.
g- The Parisian California.
h- Booth at the Barrier.
i- The Chateau of Asnieres.
18- The Silent Member.- (No. XXIX.)
19- Indian Finance and Indian Government.
20- Chess,- with Problem No. 599.
21- Epitome of News- Foreign and Domestic.
22- Engravings from the "Meeting of the Royal Agricultural Society of England,
at Carlisle."
a- Mr. E. Booth's Short-Horned Bull.
b- Lord Berwick's Hereford Ox.
c- Agricultural Horses.
d- Mr. Thomas Elliot's Shearing Ram.
e- Mr. T.C. Borthwick's Pen and Ewes.
f- Mr. George Robinson's Pen of Shearing Ewes.
23- Some remarkable Examples of Irregular Growth in the Oyster.