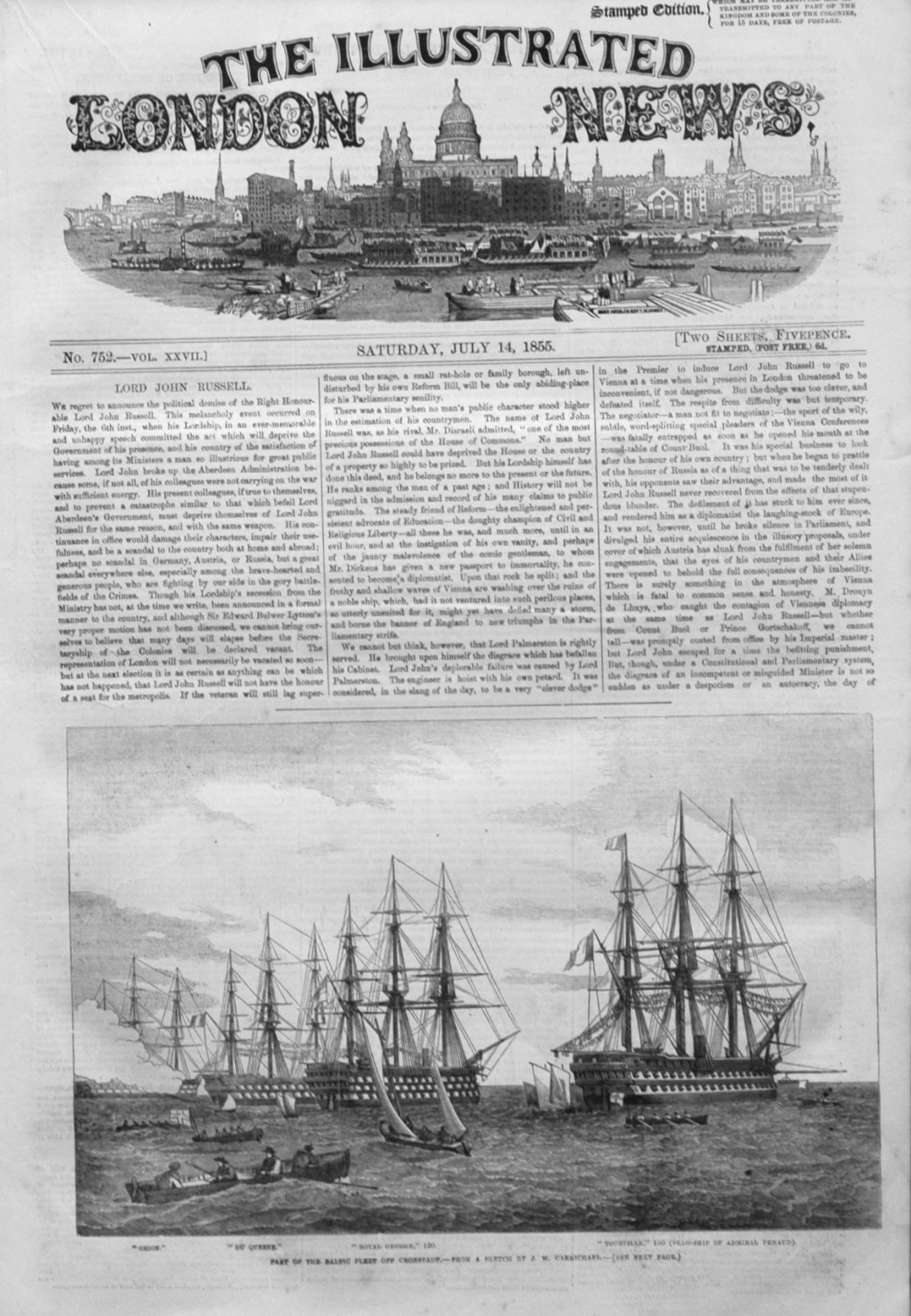 For Sale is the Illustrated London News with Supplement for July 14th 1855.
Edition No. 752. This Issue Contains 8 Pages, 16 Sides, and the Supplement
Contains 6 Pages, 12 Sides, copies taken from a Bound Volume, therefore the Binding Holes are showing

Condition of the Text and Engravings is Bright and Clear. Copy shows Light Foxing throughout. A Water Stain can be seen on the Right Hand Margin,  which on some pages encroaches into the Text and Engravings. The Map on European Russia has the Writing cut off at the Bottom, it appears that it was Printed this way. Red London News Stamp on inside Page. Spine has been Strengthened with Filmoplast Tape.

1- Full Page Engraving "The French Camp at Honvault, near Boulogne."
2- The War in the Crimea.
3- Official Despatches from the Crimea.
4- Reinforcements for the Crimea.
5- Engraving showing "Embarkation of the 3rd Regiment of Lancashire Militia,
at Liverpool, for Gibraltar."
6- Opening of the Hereford, Ross, and Gloucester Railway.
7- Engraving showing "The Ross, Hereford, and Gloucester Railway.- The Town
of Ross."
8- Music.
9- The Theatres.- Haymarket.  Adelphi.
10- the Queen at Aldershot.
11- Imperial Parliament.
12- The Riot at the West-End.
13- Naval and Military Intelligence.
14- Double Page Map of European Russia.- Compiled from Original
Documents by John Dower.
15- War Obituary.
16- Epitome of News - Foreign and Domestic.
17- The Silent Member.- (XXV.)
18- Chess,- with Problem No. 595.
19- The Demonstration in Hyde-Park.
20- Engraving showing "The Stage-Coach of the Last Century."- Painted by
John Gilbert From the Exhibition of the Society of Painters in Water-Colours.
21- Engraving showing "Collecting the Offering in a Scotch Kirk."- Painted By
J. Phillip.- From the Exhibition of the Royal Academy.