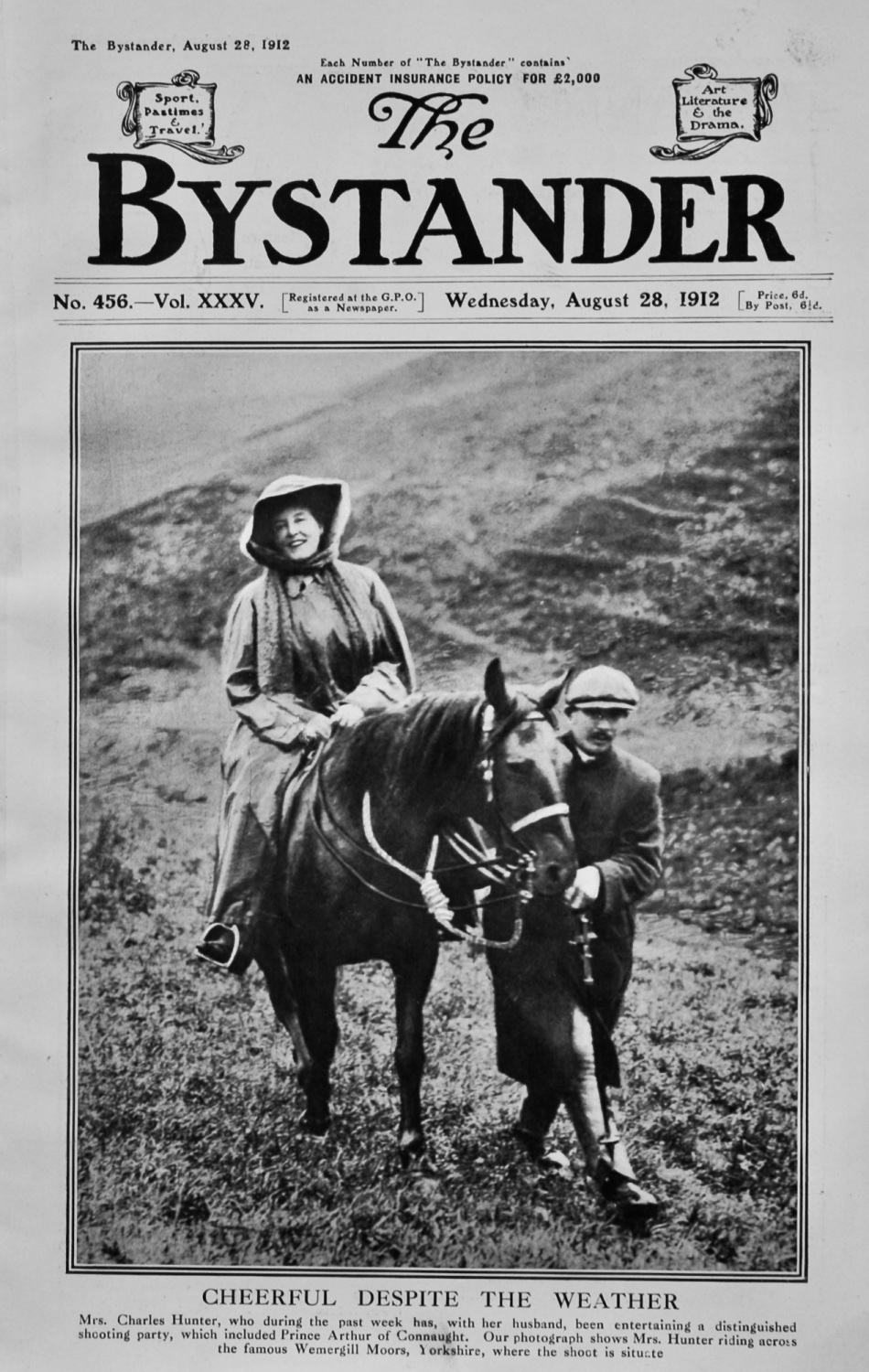 For Sale is an Edition of "The Bystander" August 28th 1912. This Copy has 25 Pges, 50 Sides, it has been taken from a Bound Volume, thereofre the Binding Holes are showing.
Contents.
1- Front Page is called "Cheerful Despite The Weather," showing a Photograph of Mrs. Charles Hunter, who during the past week has, with her husband, been entertaining a distinguished shooting party, which included Prince Arthur of Connaught. The Photograph shows Mrs. Hunter riding across the famous Wemergill Moors, Yorkshire, where the shoot is is situate.
2- The Weekly Article called "Bystander Comments on various Topics of the Times." Illustrated by E.T. Reed.
3- Article called "The Strangling of Persia." showing a Portrait Photograph of Mr. Morgan Shuster, who has just published this Book.
4- Full Page showing the following 5 Photographs of the August Flood-Scenes in the Country.
a- A Flooded Street scene in a Midland Village.
b- Delivering Bread at Alconbury, near Huntingdon.
c- Ruined Harvests : Flooded Fields near Manchester.
d- The Pleasures of Cycling.( Floods on the Great North Road, Peterborough)
e- The Aerodrome at Huntingdon under Water.
5- Article called "Do We Want A National Mausoleum ?"
6- Full Page Photograph called "In the Dress of Her Country." Showing a new Photograph of Countess Nada Torby.
7- Article called "The Inadequacy of the Insurance Act " Some Directions in which it is likely to be Developed. Written by "Downwriter." Illustrated by G.L. Stampa.
8- Double Page showing the following 9 Photographs called "Pictorialities." from Europe, Asia, Africa and America.
a- An Evening scene near the Pyramids of Ghizeh.
b- Obstructions on the Road near Kandy, Ceylon.  (Elephants)
c- Not in Ceylon this time but in Co. Kerry, Ireland. (Donkey)
d- A Giant Sturgeon 13 ft 6 inches  Long, Caught recently in the River Fraser.
e- The Recent Acquisition to the joys of the Metropolis. (Zebra)
f- The Crown Prince of Saxony.
g- The Crown Prince of Saxony Digging Sand-Castles at the North-Sea Bath, Juist.
h- "Rafting" in Bavaria.
i- The Start for a Camel-Race at Luna Park, Paris.
9- The Weekly Article "London Nights Entertainments," showing a Review of "Ready Money" at the New Theatre. Article is written by "Jingle" and Illustrated by Norman Morrow.
10- Full page Photograph of the Actress - Manageress Miss Hilda Trevelyan.
11- Full Page showing the following 3 Photographs of Scenes of the French Premier's recent visit to Russia.
a- At the Banquet in Honour of M. Poincare.
b- Watching the Parade.
c- The Tsar Leaving the Parade Ground at the Krasnoe Selo.
12- The Weekly Article "Bystander in Berlin," Berlin's Fight for a Swimming Bath.
13- The Weekly Article "Bystander in New York," American Business Methods Exposed. Written By O.M.H.
14- Full Page of Illustrations by Mr. W. K. Haselden, called "Odds and Ends at Homburg.
15- Full Page Advert for "Tecla."
16- Full page Article with Photographs called "America at the Seaside."
17- Double Page Illustration called "Matinee D'ete" : From the Painting by  R. Du Gardier.
18- Article called "Matter Musical," Mainly about the "Proms." Written by Francis Toye.
19- Full page Photograph called "Mermaids and Mere-Men," showing Sport among the Bathers at Sandown, Isle of Wight.
20- The Weekly Article "The Look of Things, from a Bystander's Point of View."
21- Full Page Photograph showing "The Australian Grand National : Steeplechasing near Melbourne."
22- Bystander Short Story "A Matter of Faith." Written by Eleanor Mordaunt.
23- Full Page showing the following 3 Photographs of "The Monks of St. Bernard" for 800 Years the Patrons of the Touring Industry in Switzerland.
a- The Chief Monk with one of his Short-Coated Life-Saving Dogs.
b- Off-Duty : a Party of the St Bernard Monks on a Mountain Excursion.
c- The Summit of the St. Bernard Pass, showing the famous Monastery.
24- Full Page Photograph called "The Height of Her Ambition" showing Madame Leontine Richard and her Guide on the Peak of the Belvedere.
25- The Weekly Article called "The Literary Fog," by Ralph Straus. Showing a small Portrait Photograph of Mrs. Alice Perrin.
26- Full Page showing the following 3 Photographs called "Have We No Use for Them ?." Public Letter Writers in Italy and the Near East.
a- A String of Public Letter-Writers in a Cairo Throughfare.
b- A Familiar Sight in Suez : Public Letter-Writers Waiting for Clients.
c- The Scrivano Publico in a Corner of the Campo Di Fiori, Rome.
27- Full Page Photograph called "Still Known as The Weaker Sex." showing a Team of Finnish Girls at the Olympic Games at Stockholm.
28- Article called "Shooting : Some Advice to the Novice." By Leonard Willoughby.
29- Quarter Page Advert for "Eley Cartridges."
30- Half Page Advert for "The Pianola Piano."
31- The Weekly Article "Sports and Pastimes." (Cricket and Yachting)
32- Article on "Golf" by Ernest Lehmann.
33- Quarter Page Advert for "Colonel" Golf Balls.
34- Quarter Page Advert for "Spensers, Ltd."  (Lighting)
35- Article called  "Racing : York Prospects." by Carbine.
36- Half Page Advert for the Turf Accountant "Michael M. Gant."
37- Full Page Advert for "Bird's Custard."
38- Quarter Page Advert for "Country Life" Tobacco.
39- Quarter Page Advert for "D.H. Evans." (Sprungola Shirts)
40- Article "Motoring : by Land, Sea, and Sky." Written by Alex J. M. Gray.

Condition is Good, Print being Bright and Clear, No Foxing. Spine has been Strengthened with Filmoplast Tape.