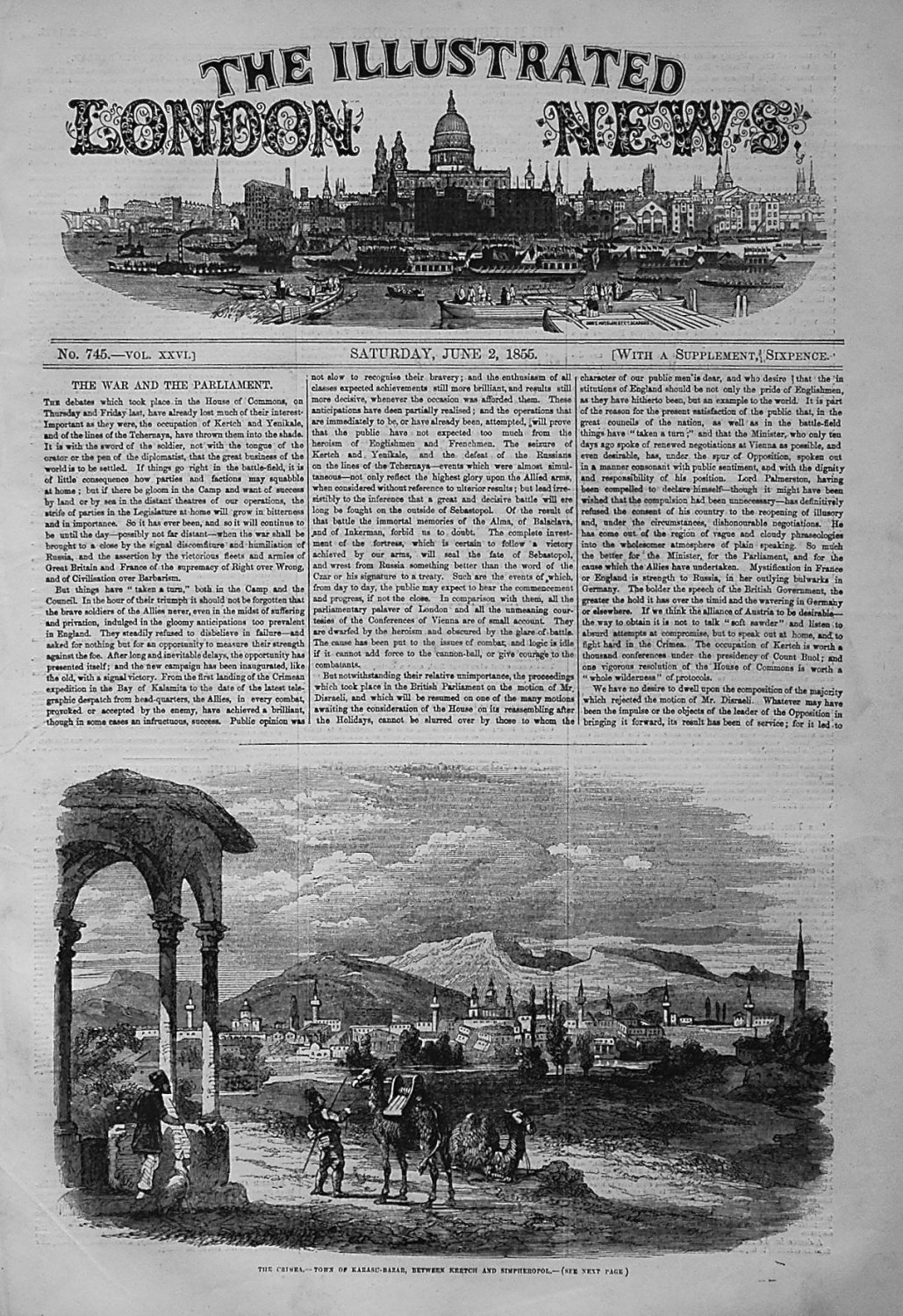 For Sale is an Edition of the Illustrated London News June 2nd 1855. This Issue contains 12 Pages, 24 Sides, and has been taken from a Bound Volume.

Condition is Good, with Light Foxing Spots on a Couple of Pages.

Articles.
1- Front Page Article called "The War and the Parliament."
2- Karusu-Bazar.
3- Count Walewski's Circular.
4- English and Russian Prisoners.
5- Correspondence between Lord Aberdeen and Lord John Russell.
6- Opening of the First Railway in Switzerland.
7- The Infant Church in South Africa.
8- Industrial Demonstration in Ireland.
9- Visitation of the Archdeacon of Middlesex.
10- Naval and Military Intelligence.
11- Epitome of News - Foreign and Domestic.
12- The Paris Universal Exhibition.
13- The Ramazan.
14- Review of the French Army Of Reserve.
15- The Eruption of Vesuvius.
16- Town and Table Talk on Literature.
17- Chess. (with Problem No. 589.)
18- "Henry the Eighth," at the Princess Theatre.
19- Ceremony of "Throwing the Dart."
20- "Marchioness," the Winner of the Oaks.
21- Surrey Zoological Gardens.
22- Music.
23- The Theatres.
24- The "Cock and Bull" Prophecy of the War. (A Letter to the Editor.)
25- Royal Thames Yacht Club.
26- Paris Fashions for June.
27- Foreign and Colonial News.
28- The War in the Crimea.
29- The Court.
30- Metropolitan News.
31- Obituary of Eminent Persons.
a- General Lord C.S. Manners.
b- John Heaton, Esq., of Plas Heaton, Co. of Denbigh.
c- General Sir William Macbean, K.C.B.
d- Lieut.-General Sir George Charles D'Aguilar.
e- Viscount Stangford.
32- Newly Invented Drying-Closet.
33- Monument to the Guards at Windsor.
34- National Sports.
35- Monetary Transactions of the Week.
36- The Markets.
37- The Baltic Fleet.

Engravings.
1- The Crimea. - Town of Karusu-Bazar, Between Kertch and Simpheropol.
2- Lausanne, from the English Church.
3- Berne and Geneva Railway. - The Poudriere Viaduct over the Venoge River.
4- Berne and Geneva Railway. - Station at Yverdun, on the Lake of Neuchatel.
5- English Episcopal Church Building at Riversdale, in South Africa.
6- Demonstration at Mulla, Tullamore.
7- The Ramazan, in the Mosque of Tophana.
8- The Grand Review of the French Troops at Constantinople, by the Sultan.
9- Grand Review of the French Troops at Constantinople by the Sultan (Full page).
10- Picture-Model of the Town and Ports of Sebastopol, at the Surrey Zoological Gardens.
11- "Marchioness," Winner of "The Oaks," at Epsom.
12- Ceremony of "Throwing the Dart" by the Mayor of Cork.
13- Scene from Shakspeare's Play of "Henry the Eighth," at the Princess' Theatre. - The Vision - Queen Katherine's Dream.
14- Royal Thames Yacht-Club. - The "Phantom" and "Marina" -Close the Match.
15- Paris Fashions for June.
16- Near Sebastopol - The Middle or "White House" Ravine.
17- Table just Erected in Holy Trinity Church Windsor.
18- Near Sebastopol. - Ambulance Waiting for the Wounded.
19- House in Sebastopol, Seen Through a Telescope.
20- Sebastopol, From the Green-Hill Battery.
21- Newly Invented Drying-Closet, for the Hospital at Scutari.
22- Washing Establishment for the General Hospital at Balaclava.
23- The "Geyser" and "Archer" off Riga.