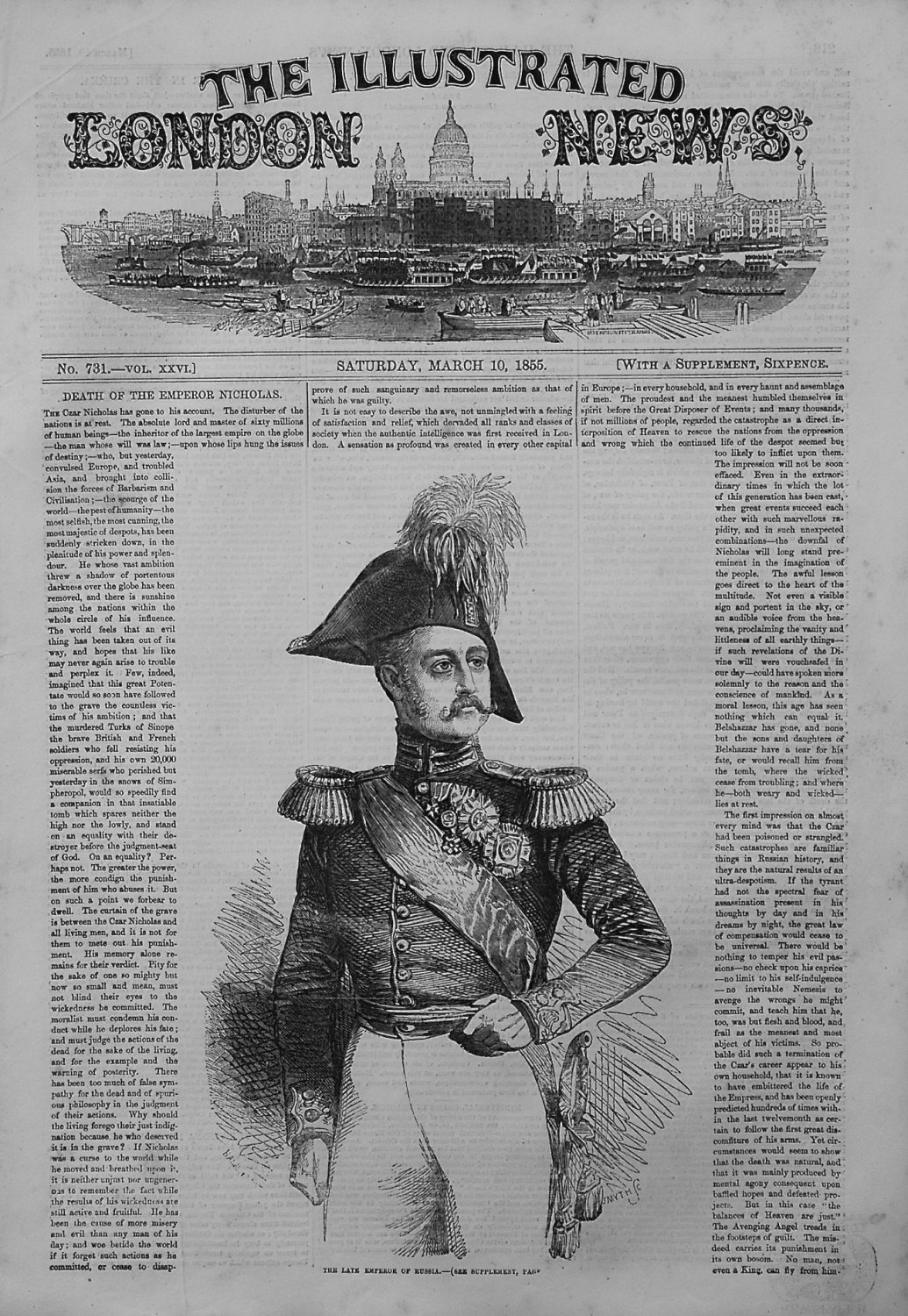 For Sale is an Edition of the Illustrated London News March 10th 1855, THis Issue contains 8 Pages, 16 Sides, and has been taken from a Bound Volume.
Condition is Good, being Bright and Clear, with the odd Foxing Spot showing.

Articles.
1- Death of the Emperor Nicholas.
2- Foreign and Colonial News.
a- Ministerial Crisis in Belgium.
3- The War in the Crimea.
a- The Vienna Negotiations.
b- Illness and Death of the Czar.
c- The New Emperor, Alexander II.
d- Dangerous Conspiracy in Cuba.
e- Riots in Australia.
f- The French Emperor at Boulogne.
4- The Revolution in Peru.
5- Major-General William Henry Adams, C.B.
6- Destruction of Kelham-Bridge.
7- Larch in the Grounds of Killymoon Castle, County Tyrone.
8- The Late Rev. G. Fletcher.
9- Etiquette of Court Mourning.
10- The Court.
11- The Battle at Eupatoria. - Official Despatches from Field-Marshal Lord Raglan.
12- Obituary of Eminent Persons.
13- Town and Table Talk on Literature, Art, &c.
14- The Navvies at Balaclava.
15- Metropolitan News.
16- Imperial Parliament.
17- Naval and Military Intelligence.
18- Music.
19- The Suppressed Pamphlet on the conduct of the War.
20- Chess, with Problem No. 577.
21- Epitome of News - Foreign and Domestic.
22- Sale of the Bernal Collection.
23- Investiture of the Order of St. Patrick.
24- The Theatres.
25- National Sports.
26- Monetary Transactions of the Week.
27- The Markets.

Engravings.
1- The Late Emperor of Russia.
2- Principle Square of Arequipa, in Peru.
3- The Fort of Islay, in Peru.
4- Portrait of The Late Major-General W. H. Adams, C.B.
5- Portrait of the Late Rev. G. Fletcher, Aged 104.
6- Larch in the Grounds of Killymoon Castle.
7- Kelham Bridge, near Newark, Destroyed by the Ice.
8- Commencement of the Railway Works at Balaclava.
9- Kadikoi, the Head-Quarters of Sir Colin Canpbell, before Sebastopol.
10- The Railway Works at Balaclava.
11- Scene from Meyerbeer's New Opera, "L'Etoile Du Nord," at Drury Lane Theatre.
12- Investiture of the Order of St. Patrick, at Dublin Castle.
13- Sale of the Bernal Collection.
a- Ewer and Tazza of Limoges Enamel.
b- Group of Medieval Plate.
c- Portrait of Isabella, Queen of Charles IX.
d- Group of Majolica Faenza or Raphael Ware.
e- Group of Venetian and German Glass.
14- "In the Trenches." Before Sebastopol.- from a Sketch by J.A. Crowe.