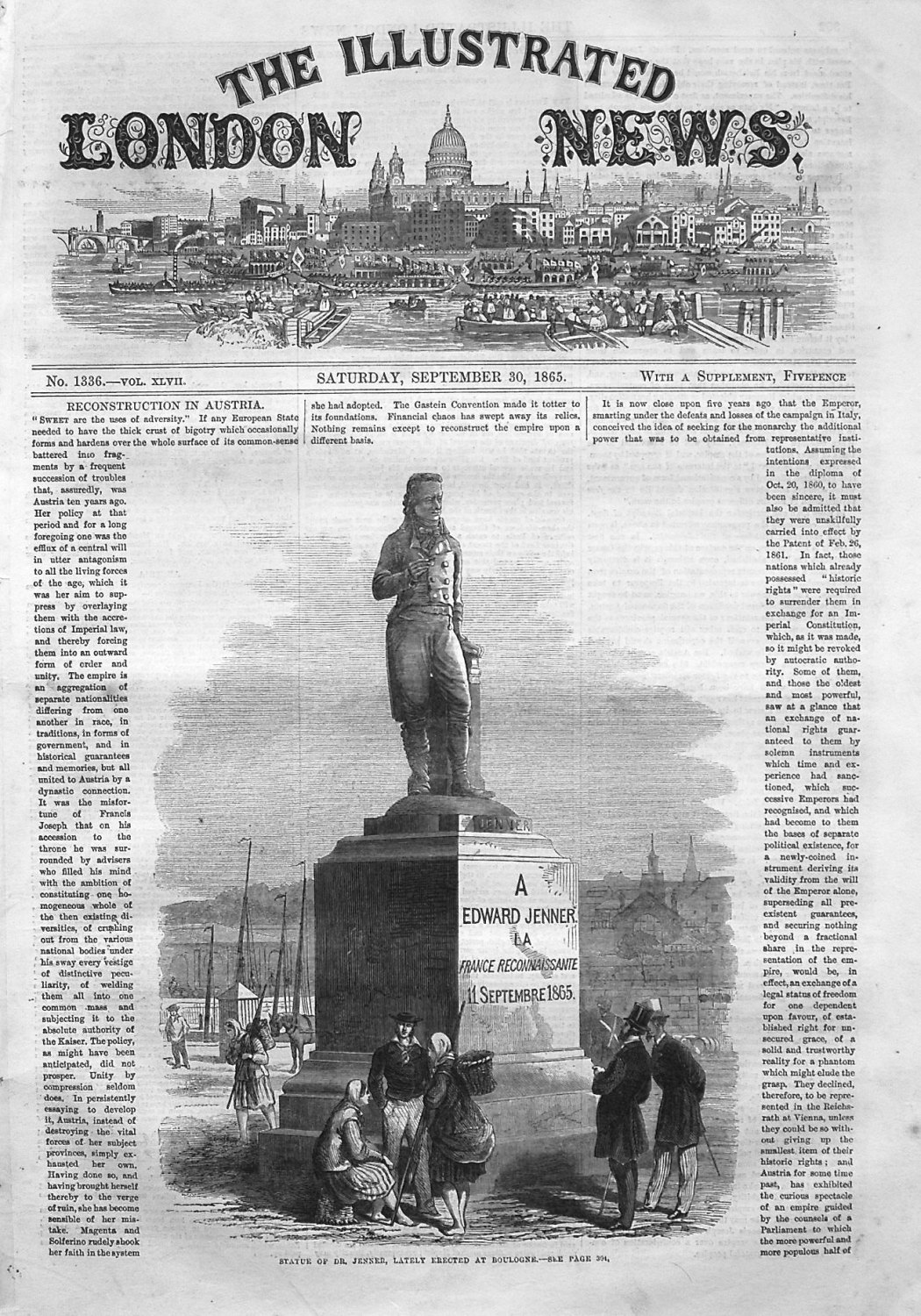 For Sale is an Issue of the Illustrated London News September 30th 1865. This Issue contains 12 Pages, 24 Sides, and has been taken from a Bound Volume.

Condition of Print is Bright and Clear, very little Foxing. Spine has been Strengthened with Filmoplast Tape.

Engravings.
1- Statue of Dr. Jenner, Lately Erected at Boulogne.
2- The Chinese Giant, Chang, with his Wife and Attendant Dwarf.
3- Subway of the new High-Level Station at the Crystal Palace.
4- The New High-Level Station at the Crystal Palace.
5- "Rubens, his Wife, and Child," by Rubens, from the Exhibition of Old Masters, at the British Institution.
6- "The Teufelsbrucke," from the Farnley Hall Collection of Drawings by J.M.W. Turner.
7- Admiral King's Visit to the King of Siam at Bangkok.
a- Procession of Boats up the River from the British Consulate.
b- Procession from the Royal Landing-Place to the Palace.
8- The Spanish Iron-Clad Frigate Numancia in the Harbour of Callao.
9- The War in Bhootan : View of Buxa Dooars.
10-  The Late Admiral Sir W.H. Smythe, F.R.S.
11- The Earl of Pembroke Laying the Foundation-Stone of the Herbert Memorial Hospital at Bournemouth.
12- The Bishop of Chichester giving his Benediction to the Hayling Island Life-Boat.
13- Scene from "Rip Van Winkle," at the Adelphi Theatre : Rip Van Winkle Drinking the Magic Draught.
14- Regatta of the Lisbon Royal Yacht Club.
15- Paris Fashions for October.
16- Fenian Weapons Seized in a Blacksmith's Shop at Cork.
17- The Sailors' Club, Margate.
18- The New Vestry-Hall of St. Mary's, Newington.
19- All Saints' Church, Nottingham.
20- The Civil Service Clubhouse, on the Site of the  Old Thatched House.