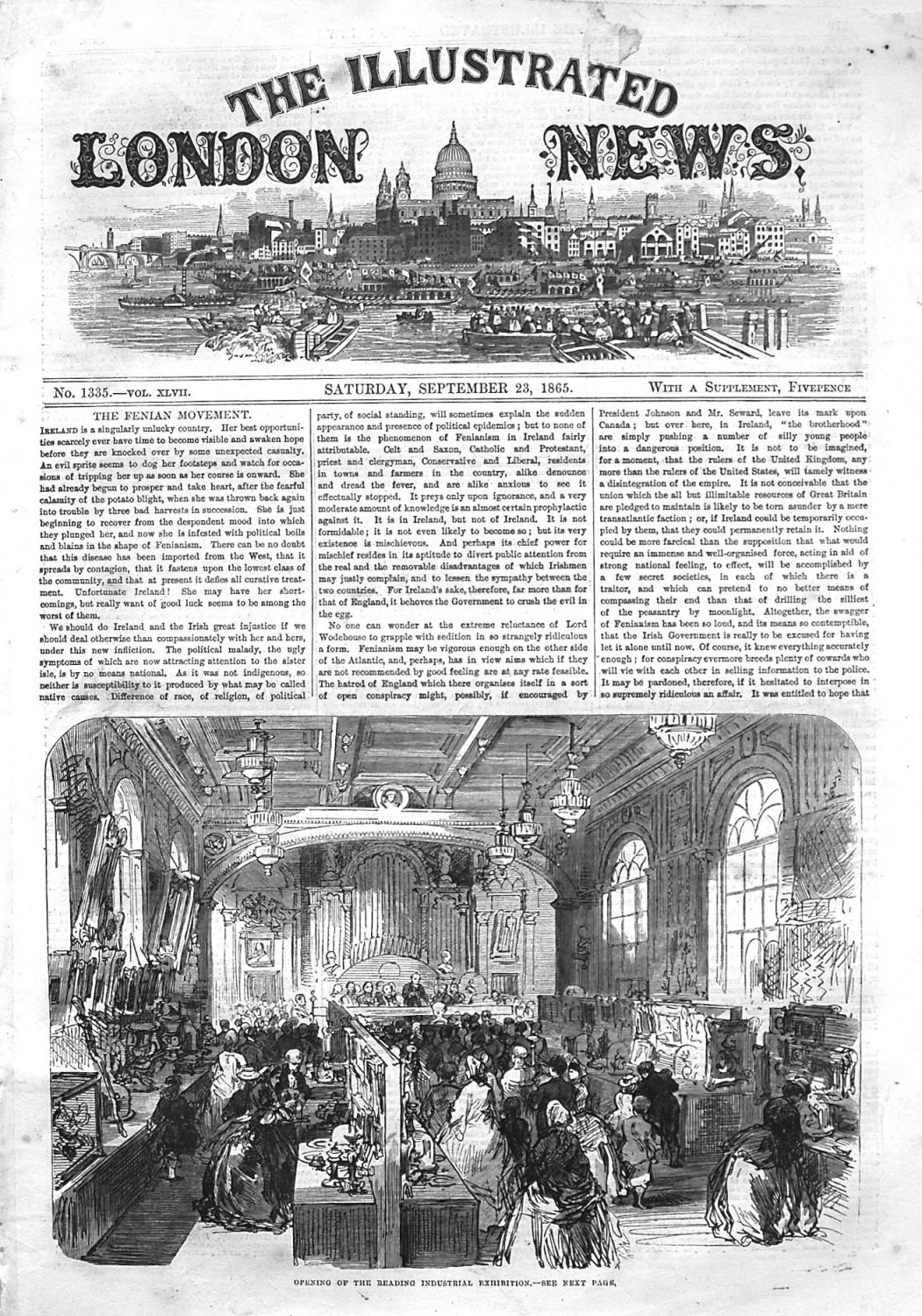 For Sale is an Issue of the Illustrated London News September 23rd 1865. This Issue contains 12 Pages, 24 Sides, and has been taken from a Bound Volume.

Condition is Bright and Clear, with very little Foxing, Spine has been strengthened with Filmoplast Tape.

Engravings.
1- Opening of the Reading Industrial Exhibition. (Front Page).
2- Meeting of the British Association at Birmingham.
a- The Reception-Room. (Half Page).
b- Soiree in the Townhall : The Refreshment-Room. (Half Page).
3- Meeting of the British Association at Birmingham.- Excursions to Malvern and the Wrekin.
a- The Priory Church, Malvern.
b- The Wytch, near Malvern.
c- The Wrekin.
d- Through the Woods to the WQrekin - " The Pursuit of Science under Difficulties."
e- The Secretary of the Severn Valley Field Club Reading a Paper on the Geology of the District.
4- Industrial Exhibition at Bingley Hall, Birmingham. (Full Page).
5- "The Building of the New Castle on the Tyne, 1080." From a Picture by W.B. Scott. (Full Page).
6- Professor Phillips, F.R.S., President of the British Association for 1865.
7- H.M.S. Leopard in Dock at Shanghai.
8- Swinhoe's Pheasant, Lately added to the Collection of the Zoological Society of London.
9- The Wakefield Industrial Exhibition.
10- The Welsh National Eisteddfod at Aberysywith. (Full Page).
11- The Gloucester Musical Festival : The Nave of the Cathedra, Looking West.
(Full Page).
12- The Gloucester Musical Festival : The Clerestory, Gloucester Cathedral.
13- South Porch, Gloucester Cathedral.
14- The New Church of St. Michael and All Angels, Shoreditch.
15- Temporary Church within St. Michael's.
16- The Cholera at Malta : The 100th Regiment Encamped on the Glacis of Fort Manoel.
17- Destruction of St. Mary's Roman Catholic Cathedral at Sydney, New south Wales.