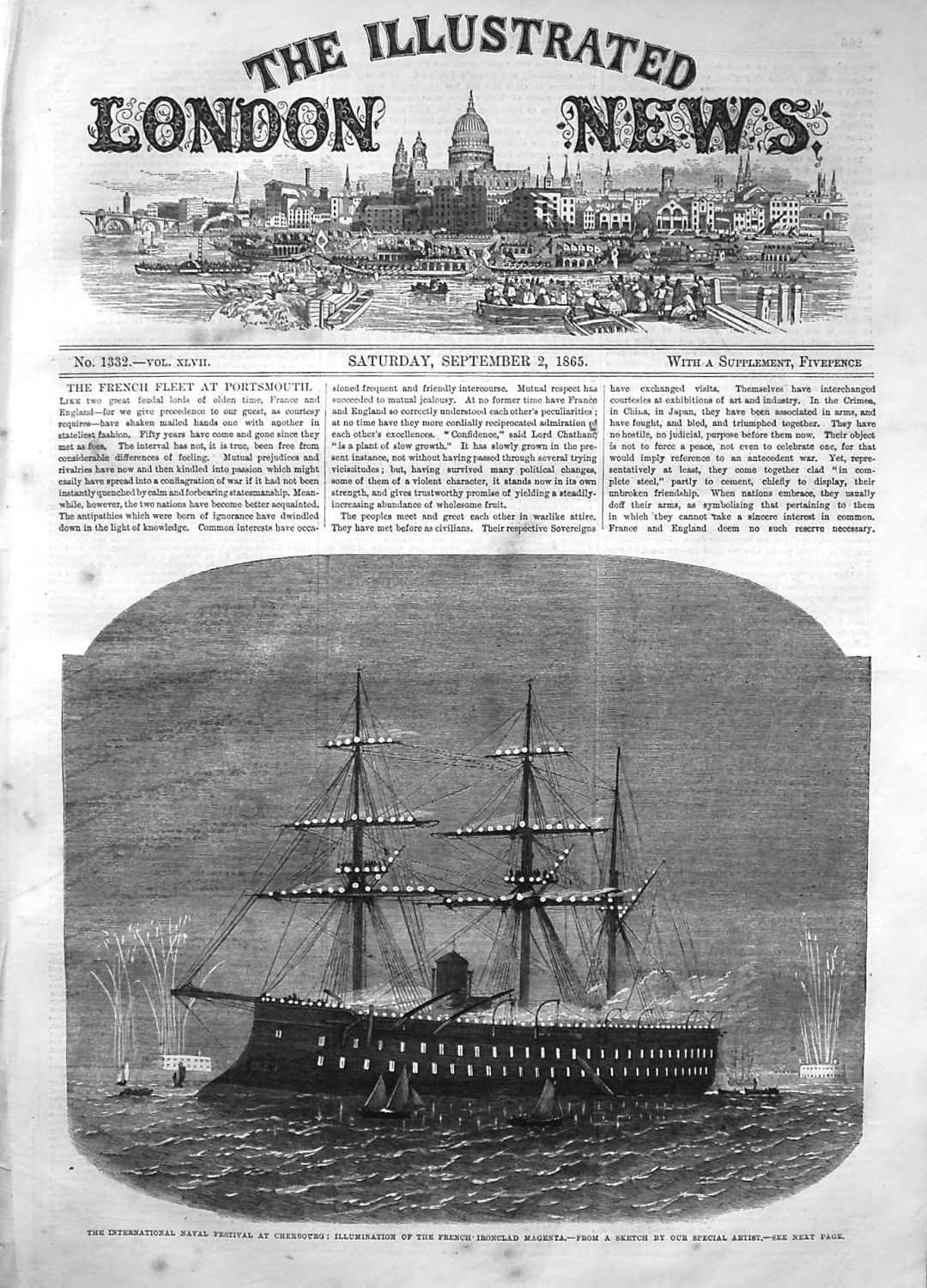 For Sale is an Edition of the Illustrated london news September 2nd 1865. This Issue contains 12 Pages, 24 Sides, and has been taken from a Bound Volume.

Condition of Print is Bright and Clear, Foxing Spots Appear in Places. Binding Holes are showing. Spine Strengthened with Filmoplast Tape.
Priced with condition in mind.

Engravings.
1- The International Festival at Cherbourg :Illumination of the French Ironclad Magenta. (Front Page).
2- The International Naval Festival at Cherbourg.
a- The British Admiral's Flagship, Fleet of Yachts, Etc., Dressed in Honour of the Emperor's Fleet Day. (Half Page).
b- Officer's Returning from the Banquet at the Hotel De Ville. (Half Page).
3- The Ball at the Hotel De Ville. (Full Page).
4- The British Squadron in the Harbour Saluting in Honour of the Emperor's Fete Day. (Double Page Engraving with Binding Holes Showing).
5- The Right Rev. Dr. Jacobson, the New Bishop of Chester.
6- Paris Fashions for September.
7- Salzburg, the Place of Meeting of the Emperor of Austria and the King of Prussia. (Half Page).
8- Cutting the First Turf of the Great Southern Railway at Christchurch, Canterbury, New Zealand. (Half Page).
9- The Atlantic Telegraph Expedition.
a- The First Buoy, Marking the Supposed Place where the Cable was Grapple, August 3rd.
b- The Second Buoy, Marking the exact Place where the Cable was Grappled, August 8th.
c- The Paying-Out Machinery of the Great Eastern.
10- Chart of the movements of the Great Eastern during the Search for the Broken Telegraph Cable.
11- The Atlantic Telegraph Expedition.
a- Preparing for the Final Attempt to Grapple the Lost Cable. (Full Page).
b- The Great Eastern off Brighton on her Return Home. (Full Page).
12- New Zealand Chief, William Thompson, Negotiating with Brigadier-General Carey.
13- Surrender of William Thompson to Brigadier-General Carey.
14- Chinese Pirates Attacked by the British Gun-Boat Opossum, near Hong-Kong.