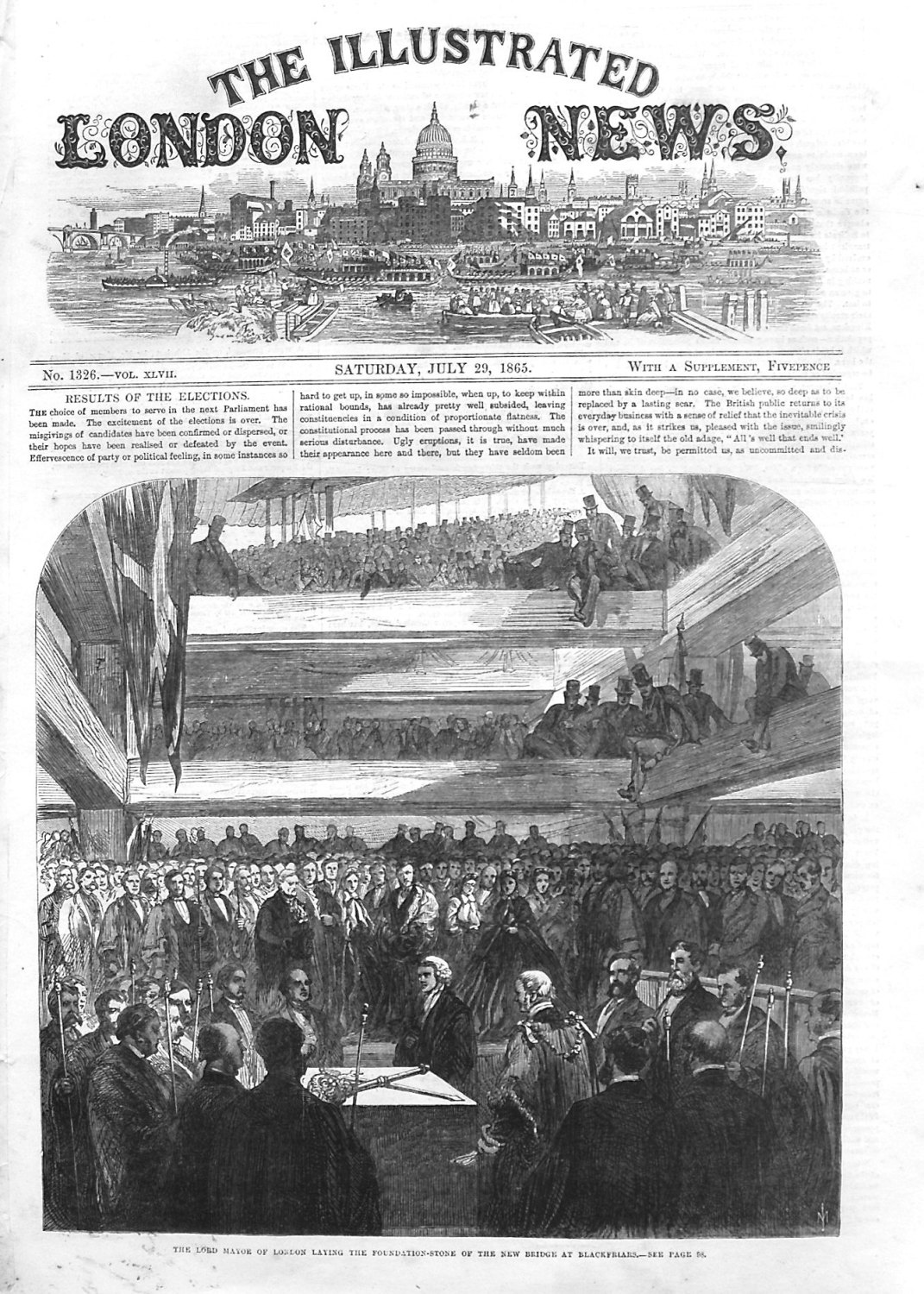 For Sale is an Edition of the Illustrated London News July 29th 1865. This Issue contains 12 Pages 24 Sides, and has been taken from a bound Volume.

Condition of Print is Bright and Clear, Pages are Lightly Tanned. Hardly any Foxing. The Odd Age Mark appears in places. Spine strengthened with Filmoplast Tape.

Articles.
1- Results of the Elections.
2- Foreign and Colonial Intelligence.
3- Naval and Military Intelligence.
4- Country News.
5- Church and Universities.
6- The Farm.
7- The Murder of a Missionary by the Maoris in New Zealand.
8- Pure Merino Ram Exhibited at the Dresden Show.
9- Births, Marriages, Deaths.
10- The Atlantic Telegraph.
11- The Court.
a- Departure of the Queen of the Netherlands.
b- The Prince and Princess of Wales.
c- Marriages in High Life.
12- Echoes of the Week.
13- Archaeology of the Month.
14- The Visit of the Prince and Princess of Wales to Plymouth.
15- Music.
a- Meyerbeer's Opera "L'Africaine."
16- The Theatres.
17- National Sports.
18- The Trial and Conviction of Constance Kent.
19- The Markets.
20- Monetary Transactions of the Week.
21- The National Rifle Association Prize Meeting at Wimbledon.
22- The New House of Commons.
23- The Middlesex Industrial School at Feltham.
24- Wreck of the Mail-Steamer Athens, at the Cape of Good Hope.
25- Laying the Foundation-Stone of the new Bridge at Blackfriars.
26- Laying the Foundation-Stone of Old Blackfriars Bridge in 1760.
27- The Election.
28- Current Literature.
29- Chess, with problem No. 1118.
30- Obituary of Eminent Persons.
a- Mr. Benjamin Gompertz, Esq.
b- Lieutenant Clutterbuck.
c- Mrs. Brand.
d- Mr. W.K. Wilson.
e- Prince Frederick of Schleswig-Holstein.
f- Lord Francis Douglas.
31- Wills and Bequests.
32- Prize Donkeys, the Property of Miss Burdett Coutts.

Engravings.
1- The Lord Mayor of London Laying the Foundation-Stone of the New Bridge at Blackfriars. (Front Page).
2- The Murder of a Missionary by the Maoris in New Zealand.
a- Capture of the Rev. Mr. Volkner on Board the Schooner Eclipse, at Levy's Wharf, Opotiki. (Half Page).
b- Savage Dance of the Pai Marire Fanatics. (Half Page).
c- Captain Levy, Master of the Schooner Eclipse.
d- Scene of the Murder of the Re. Mr. Volkner, at Ototiki, New Zealand.
3- Merino Ram, Lately Exhibited at Dresden.
4- Visit of the Prince and Princess of Wales to Plymouth : The Royal Yacht Osborne Passing through the French and English Squadrons of Ironclads in Plymouth Sound. (Full page).
5- Showyards of the Royal Agricultural Society of England at Plymouth. (Full Page).
6- Paris Fashions for August. (Half Page).
7- Visit of the Prince and Princess of Wales to Plymouth.
a- The Prince and Princess Landing at Barnpool, Mount Edgcumbe.
b- Mount Edgcumbe, Visited by their Royal Highnesses.
c- The Royal Highnesses in the Showyard of the Royal Agricultural Society.
8- Mr. Sharman, 4th West York Rifle Volunteers, the winner of the Queen's Prize.
9- The National Rifle Association : The Evening Band in the Volunteer Camp.
10- The National Rifle Association Prize Meeting at Wimbledon.
a- Diversions of the Camp : The Highland Games. (Half Page).
b- The Foot-Races. (Half Page).
c- Running and Loading for the Horatio Ross Prize. (Quarter Page).
d- The Picket Going Camp Rounds. (Quarter Page).
11- Annual Inspection of the Middlesex Industrial School at Feltham.
12- Sir Thomas Chitty, Lord Mayor of London, Laying the Inauguration-Stone of Old Blackfriars Bridge in 1760. - Taken from an Old Engraving.
13- Wreck of H.M.S. Athens in Table Bay, Cape of Good Hope.
14- Pair of Donkeys in Harness Exhibited by Miss Burdett Coutts at the Mule and Donkey Show in the Agricultural Hall, Islington.