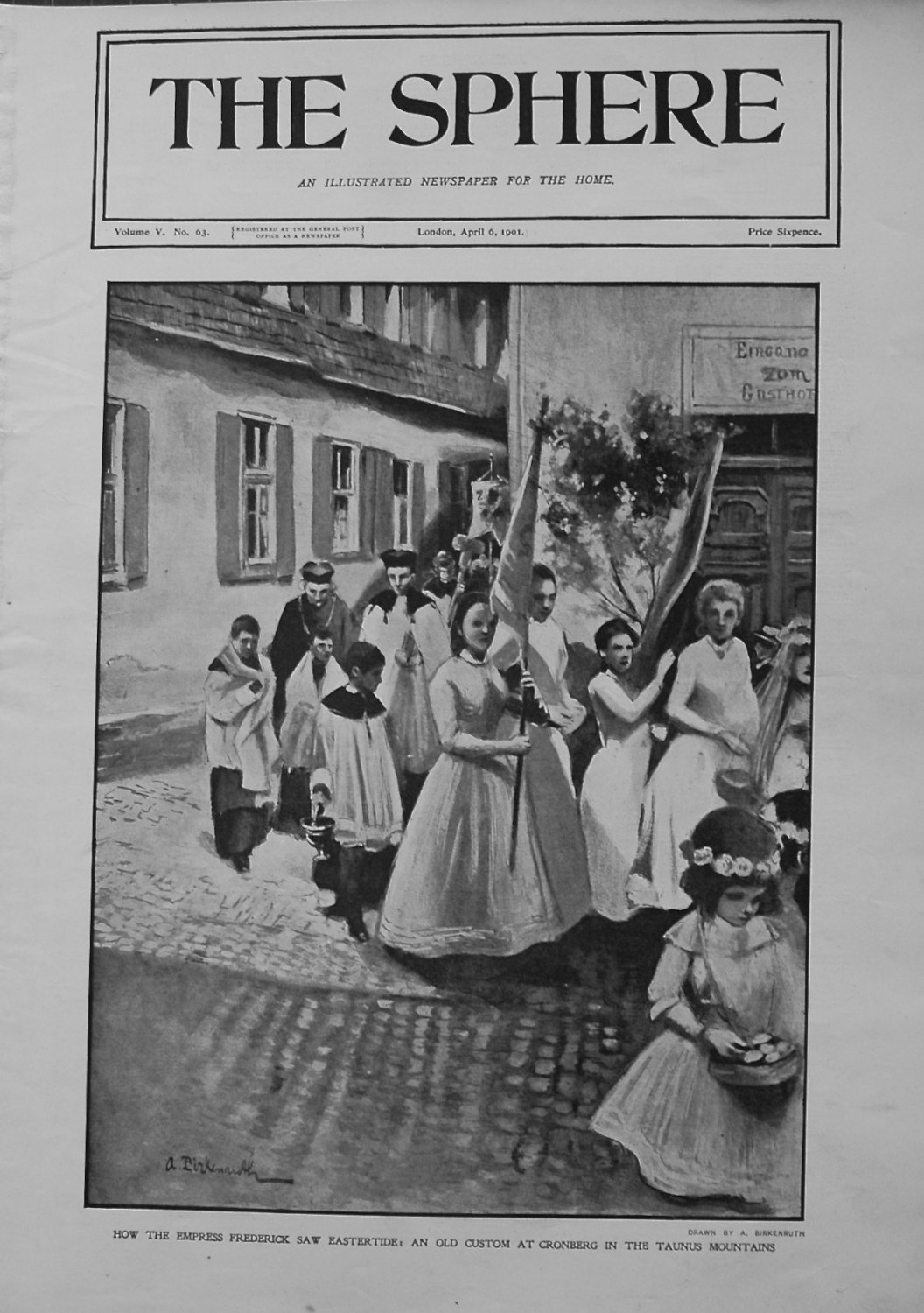 For Sale is an Issue of "The Sphere," April 6th 1901, Volume V. No. 63. containing 17 pages, 34 sides, this issue has been taken from a Bound Volume, therefore the Binding holes are showing.

Contents.
1- Front Page shows a drawing by A. Birkenruth, called "How the Empress Frederick Saw Esatertide : An old Custom at Cronberg in the Taunus Mountains."

2- The Weekly Article  "The Newsletter." showing London Week by Week.

4- Full Page called "The Rock of Gibraltar's welcome to the Heir-Apparent." showing the following 3 Pictures from photographs by Campbell Sinclair.
a- The Camerons' Arch of Welcome.
b- One of the Duchess's Gibraltar Presents.
c- Mr. A. Mosley, C.M.G., Reading an Address of welcome in front of the Chamber of Commerce.

5- Full Page showing Illustrations with Photograph for "The Duke and Duchess of Cornwall - laying a Stone of Gibraltar's New Harbour." Illustration drawn by P.F. Spence.

8- Article on "The Continued Fighting in South Africa."

10- Article with Photographs for "The Petroleum Oil Well Fires at Baku - The biggest blaze ever seen."

12- Article with Photographs called "The Emperor of the United States : The Crowning of William (McKinley) I."  Written by George Lynch.

13- Full Page Picture of "Princess Victoria, the Youngest : The Granddaughter of King Edward."
Descriptive Text Beneath.

15- Article called "The Progress of the Great Naval and Commercial Harbour Works at Dover." With Illustrations.

16- Double Page Print drawn by Charles Wyllie showing "The Harbour at Dover, on which many millions of money are being spent."
Descriptive Text beneath.

17- Full Page picture showing "A Recent Gift to the National Gallery : "The Wood Sawyers," by J.E. Millet, in the Collection of M. Ionides."

18- Article on "Amusements." showing the following 3  Photographs.
a- Mr. Martin Harvey as Count Skariatine, at the Court theatre.
b- Miss Violet Vanbrugh in "Peril" at the Garrick Theatre.
c- Miss Eva Kelly in "The Belle of Bohemia," at the Apollo Theatre.

21- Full Page Illustration drawn by Ernest Prater, showing "How the Post Office at Mount Pleasant Deals with Letters for the Provinces."

23- Full Page Article on "The Excommunication of Count Tolstoy."

25- Article called "Lord Armstrong's Stronghold - The Castle of Bamburgh, and the story of Grace Darling."

26- Article with Photographs for "The Royal Tour to Australia : The Duke of Cornwall at Malta."

30- Half Page Advert for "Pioneer Tobacco."